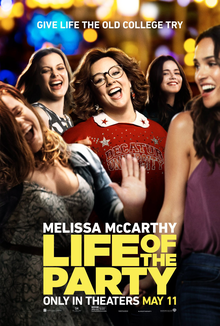 Never mix business and pleasure. That’s what we’re always told and it’s something that Melissa McCarthy and her husband Ben Falcone should really have paid more attention to. This year’s The Life of the Party is their third time of collaborating on a film. The first, Tammy, was such a dire experience for me that I, apparently, didn’t even bother to review it. Something I did, at least, manage for their second film The Boss. But it’s fair to say that neither of these films were a great example of who McCarthy is as a performer. I don’t really understand how it could have gone so wrong either. She and her husband co-wrote both films but, for some reason, decided to write them with a lack of genuinely funny jokes. Instead, they both rely on the physical comedy that McCarthy is regularly forced to rely on to get a laugh. I’ve been a fan of hers since I first saw Gilmore Girls and agree that she was the best thing about Bridesmaids. So it’s been difficult to constantly be faced with an endless stream of disappointing or downright terrible films. Admittedly, some of her other collaborations with Paul Fieg have been more successful but they still feel like they’re lacking something. I go into every new films hoping this is the time she finds what’s missing. Watching the first trailer for The Life of the Party I was pretty sure this wouldn’t have it but I’m nothing if not open-minded at this point.

In The Life of the Party Melissa McCarty plays Deanna Miles a woman who finds her whole life torn apart when her husband (Matt Walsh) tells her he’s leaving her for another woman. Unsure of what to do with her life, Deanna enrolls in the same university as her daughter in order to finish the degree she dropped out of to become a mother. Deanna has to readjust to college life as an adult and work out the intricate details of being a young person nowadays. Of course, it leads to a lot of hilarity, embarrassment, and a lot of personal growth. All of it utterly obvious from within the first 15 minutes. It’s clear from the off-set that this isn’t going to be the kind of film that McCarthy deserves… even if she clearly thinks it is.

That’s not to say there isn’t some joy to be hand in watching her on-screen. Melissa McCarthy is a fantastic performer who throws herself into every situation she finds herself in. She does everything with utter conviction and works hard to put her heart into it. Unfortunately, she seems determined to write terrible roles for herself. The Life of the Party would have been a perfectly acceptable comedy in the 80s or early 90s but in 2018 it feels aged. From the way that McCarthy’s character dresses to the campus stereotypes to the awkward dance battle. It just doesn’t feel very fresh or funny. You sit there thinking “I’ve seen this all done before… and it’s been done much better.”

Although, I kind of get what they were going for with this. Subverting the lads humour of films like Old School, we see an older woman rediscovering her youth and everything that comes along with that. It just feels forced. The weird and forced romantic relationship between Deanna and a much younger man should feel like its breaking down boundaries but, thanks to the input of her best friend (Maya Rudolph), it feels creepy and wrong. For a film that is supposed to be about empowering women of a certain age it does feel like we’re taking a few giant steps back instead. Because in order to prove that women are on an equal comedic level as men doesn’t mean we have to just gender swap what they are doing. Yes, women can and should be doing crude and lewd comedy but this isn’t the way to do it. Nobody would feel entirely comfortable if a middle-aged man went back to college, started having sex with a 20-year-old, and had his best friend shout encouragement about it in public. We’d be all over that shit. So that doesn’t mean it’s okay here.

The Life of the Party just feels like Melissa McCarthy had a list of things she wanted to do on-screen and then found the only situation she could manage it in. The script is badly written and full of holes. It relies too much on sentimentality and slapstick instead of successful narrative development. None of the characters are fleshed out or endearing. All of them are just terrible and flimsy stereotypes. They get lost in the chaos and you really don’t know who anyone is. Then there’s the countless subplots that all run alongside each other but don’t really have an ending. There’s no finesse or nuance here. It’s all just box ticking. Predictable and lethargic storytelling. There is no room for the lead star to do what she does best and, worst of all, it’s no even funny. If McCarthy really is the life of the party here then it’s not definitely a party I want to attend.