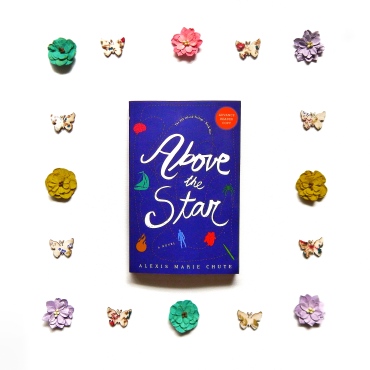 Back in January this year I had the fantastic opportunity to take part in the cover reveal of Alexis Marie Chute’s debut novel Above the Star. It was such a fun project to be a part of and I really enjoyed being able to use my creativity to help promote the novel. After the reveal took place, I was given the chance to receive an ARC in exchange for a review and, completely selfishly, I accepted. Of course, I still wanted to help make the book a success if I possibly could but, really, I just wanted to read it. Having regurgitated the plot summary so many times I’d become desperate to find out what would happen. So as soon as my copy arrived in the post I pushed aside the book I was currently reading and started it there and then. For the first in a long while, I found myself undeniably immersed and invested in a novel. I’ve been finding it difficult to read lately but this was something I couldn’t wait to dive into. It was such a revelation and I think I’m totally hooked at this point.

Above the Star is a story told by three voices: Ella, a teenage girl who has found herself unable to speak thanks to her brain tumour; Tessa, Ella’s mother who is struggling to cope after her husband abandoned her and her daughter; and Archie, Tessa’s grandfather who is desperate to bring together his fractured family. Shortly after his son’s disappearance, Archie discovers his notebooks that give details of a strange world that is linked to our own. They tell tales of a possible cure for Ella’s illness so Archie makes the decision to journey there himself in the hopes of finding the cure and possibly his son. An unfortunate series of events sees all three members of the family transported along with the entire cruise ship they are travelling on. The group must adapt to the confusing and dangerous island of Jarr-Wya, which is currently in the middle of a very turbulent time. The island’s natives are currently on the verge of war thanks to the mysterious star that fell into the sea. Can Archie, Tessa, and Ella survive long enough to discover her cure?

As soon as I read the summary for Above the Star I knew I wanted to read it. It gave me ideas of Neil Gaiman, The Princess Bride, and plenty of other great fantasy tales. I loved the idea of the triple perspectives of the different generations and was fascinated by Jarr-Wya. So, when I was give the chance to read the book I leapt at it. And I’ve never been happier about anything. The book was utterly captivating from the first page onwards. The characters are well written and feel natural. They are presented realistically and all have obvious, humans flaws. Basically, they’re all recognisable as people you will have experienced in real life. The relationships between the three main characters are all wonderfully realised and they provide some great moments of emotion in the middle of the all the epic fantasy. As much as this book is about magic and strange creatures, it is the tale of a family united through a difficult time. It the story of love and how far someone will go to protect the people that mean the most to them.

But that’s not to say the fantasy side of it doesn’t stand up. The way that writer, Alexis Marie Chute, describes the lands of Jarr-Wya is incredible. The passages of description are so vivid and artistic that it’s so easy to transport yourself there. The writing is lush and captivating but not in that Tolkien way where it becomes a bit much. There is plenty of fun and silliness at work here to ensure everything stays well-balanced. As I’ve already mentioned, there are shades of Neil Gaiman here and Chute is hardly afraid to put her characters in jeopardy. This is a dark tale that skirts the edge of terror but is clever enough to never let its readers fall too far into the abyss. It’s clever and addictive storytelling.

Storytelling that is aided by Chute’s own artistic talents. As Ella is unable to speak she must find ways to communicate with her the people she meets. She is a talented artist and, in some instances, is able to bridge the gap using her drawings. Along with the passages of Ella’s narration there are a handful of illustrations. These little details are what really bring the book to life and make it almost impossible not to fully immerse yourself into life on Jarr-Wya. As much as I loved the writing in this book there was a little part of me that just wanted more of these images. They elevate the story to a greater level.

I have to admit, as excited as I was to read this novel I wasn’t exactly sure what to expect. There was every chance that this could have just been another clichéd fantasy novel that is essentially a watered-down version of Lord of the Rings or something. Fantasy, so much more than other genres, has the potentially to be handled so badly. Thankfully, Above the Star manages to make something magical out of it. It feels fresh and new. I’m always dubious when a book describes itself as being unputdownable or something but I genuinely couldn’t wait to read it. I was totally invested in this story and it’s all down to Chute’s writing. It’s accessible but so full of detail. I can’t wait to see what the rest of the trilogy has in store.