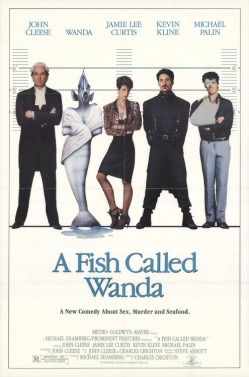 My two sisters and I are all very different people. Not in a bad way but we have always had pretty separate interests. I’m not saying we never overlapped but as we grew up we all found our interests going in different directions. As such, I’ve never really been one of those younger sisters who went too far with trying to copy their elder siblings. Although, there was one thing my oldest sister had that I was desperate to steal for myself. She owned some classic films on VHS. There were two in particular that I would borrow/try to steal on a regular basis. One of them was Some Like It Hot and the second was A Fish Called Wanda. When I was younger, I remember seeing the clip of Kevin Kline stuck in concrete shouting “I’m sorry I ate your fish” on some sort of greatest comedy films ever rundown show. I didn’t know the context of it but I knew I needed to see this film. So, when I found out that Sarah owned one I decided it was my mission to take possession of it. I’m not sure I ever managed to keep the VHS but I never stopped loving this film. So I was beyond thrilled to pick its name out of my TBT film jar for this week.

Written by John Cleese and starring Michael Palin, A Fish Called Wanda has plenty of Monty Python style humour in it but it shares even more with the classic Ealing comedies. Taking some inspiration from director Charles Crichton’s film The Lavender Hill Mob, A Fish Called Wanda centres on a dysfunctional gang of diamond thieves. When the gang turn on each other their leader is sent to prison but not before he stashes the loot somewhere secret. Unable to find her prize, his double-crossing girlfriend attempts to use her feminine wiles to get their whereabouts from his barrister. All the while trying to keep her violent and jealous lover in check and preventing the gang’s other member from discovering her betrayal.

The great thing about this film is that it is a really simple premise but it is played out so beautifully. There is so much funny material and so many great comedic performances that it doesn’t matter that we’ve seen stories like this before. It’s never dull and it never feels unoriginal. It is classically John Cleese in its weirdness but it has that traditional Ealing feel to it. It’s perfect. I loved it the first time I stole my sister’s VHS and I loved it just as much when I watched it for this review.

Yes, I might always have had a bit of quibble with the romance shoehorned in between barrister, Archie Leach (John Cleese), and gangster moll, Wanda Gershwitz but that was only thanks to its last-minute inclusion. Starting life as a dark comedy it was decided at the 11th hour that it wouldn’t play as well in the States without a touching romantic story so they added one. I’m not saying it takes away from the film but I’ve never felt it was entirely necessary to give Wanda and Archie their happy ending. But I am a cynical old thing and I probably always have been.

What Wanda manages to do is make you laugh. Thanks to Crichton’s direction not a moment of screen time is wasted on anything that doesn’t work. This is a fast paced film that gets straight to the point. And that point is the glorious slapstick and witty dialogue. It may be an old girl these days but this film still holds up to this day. Unlike me, it’s barely aged at all. The biggest set pieces are still just as riotously funny as they were at the time. Take the memorable scene where Cleese’s Archie carries out an extravagant striptease whilst speaking in Russian. It will never not be hilarious.

This is a film with a cast who are at the top of their game. You have the ever reliable Cleese and the adorably stuttering Michael Palin. My only negative is the limited time the two former Pythons spend together on-screen. But the moment they do share is one of the most entertaining scenes I’ve ever watched. Then there’s Kevin Kline who will never be funnier than he is here. Since rewatching this a few days ago I’ve been obsessed with his portrayal of violent good Otto West. Playing Wanda’s lover, Kline plays up his stupidity whilst also setting on anyone who dares call him out for it. He is one of the greatest comedy creations in cinematic history. Thanks to him I’ve been tempted to shout out my emotions whenever I’m in a tense situation.

I could continue writing this review for hours and continue to fawn over this film. It’s held an important place in my heart for years and will continue to do so. It is a darkly funny and silly film that will always bring a smile to my face. And will continue to make me believe that Kevin Kline is a much better actor than I suspect he actually is.