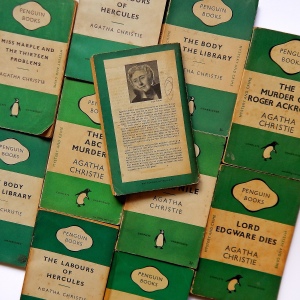 I admit that I probably took a bit of time actually getting around to reading your books. There were so many times that I’d heard them dismissed as “cosy crime” that I thought they were beneath me. They definitely sounded like the kind of thing that I, a super serious and embarrassingly pretentious literature student, shouldn’t be reading. I was, to put it mildly, an idiot. I cared so much about the image I was portraying that I stopped reading for enjoyment. When I remembered that was the main aim I was able to see what I’d been missing. I’ve had lots of enjoyable reading experiences over the years but none compare to your novels. Even now, when I reread books I know the ending to, I still find myself utterly engrossed in your plots. Still convinced that the ending I know is coming will never happen. I was a fool to dismiss you. But, in my defence, it’s not like I’m alone. So many people see you in a nostalgic light. As something silly and old that takes them back. You’ve essentially been categorised as an old friend, which you are, but it’s not the end of the story.

The thing is, you aren’t just “cosy crime”. I mean you are when compared to the identical examples of psychological thrillers that are being churned out every few months. Books like Gone Girl and Girl on a Train. The ones that need to rely on unnecessary violence and supremely grim ‘reality’ because it’s all they have. The truth is, for all the sexual violence and pseudo-psychology of these books, I hated them. They bored me. They weren’t well written and they were super obvious. I could tell from the first few chapters of Girl on a Train who the killer was and I stopped reading Gone Girl because it was blatantly obvious where Gillian Flynn was going with it. These books are all style and no substance… but they have that high fashion thing that nobody in the real-world really likes but has to accept because they don’t get it.

You’re books are the real deal. To dismiss them as “cosy” is the biggest injustice of all time. To refer to them as casual reading that you do between heavy reads is an insult. You didn’t write to shock your audience or to make headlines. You didn’t need to be the next big sensation. You wrote for real readers. Readers who don’t need thoughtless melodrama to excite them. You wrote well-plotted stories about characters that seem realistic. You had such a sense of people. That’s the reason your books have lasted. You understand the importance of the plot and what drives the plot. At the heart of every one of your murder mysteries is the one piece that moves everything else forward: the body. Once that’s in place, you have all the pieces you need to explore all aspects of humanity. To dig deep into the effect that evil has on the world. To question why people would commit murder. There’s a lot of depth people often refuse to see.

And yes, you also happen to have written some of the most exciting and shocking plot twists of all time. I remember the first times I read The Murder of Roger Aykroyd and And Then There Were None. I was genuinely shocked by the twists. I pride myself on being able to figure out where mystery writers are going with their plots but, more often than not, you stump me. You’re so detail focused that the reader becomes embroiled in the mystery. They don’t have a choice but to take on the role of detective and solve the crime too. Some of your endings were groundbreaking and still haven’t been surpassed to this day. Roger Aykroyd changed literature for fuck’s sake. It’s changed my view of you and of the genre.

You have written some of the most deceptive plots in all of literary history but the biggest piece of deception you are guilty of is your own writing. You manage to create books that can be enjoyed by people of various ages. They are simple enough for a younger reader whilst still with enough depth for a seasoned one. You skirt on the edge of darkness and evil without every firmly planting yourself in it. These are books that are so easily dismissed as childish and simplistic. But there is so much hidden away beneath the surface. You just need to engage you little grey cells to see it.
Very few of us are what we seem.
Laura