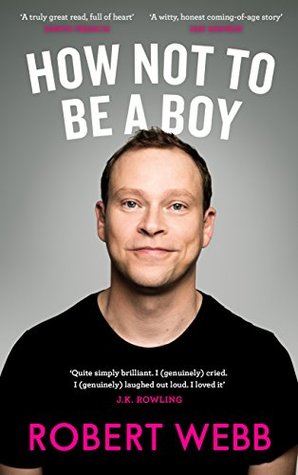 I always worry about reading people’s biographies. I find the concept of reading about someone’s life to be an extremely complicated thing. At university I was very interested in the idea of a writer’s individual voice and how it changes. How can any piece of writing be an accurate portrayal of that person when it has been written for a specific purpose/audience? When it’s been edited and reworked before being deemed ready to print? You might be sitting there screaming internally “you’re really overthinking this you pretentious knob” and, to be honest, I am. Though it’s always something at the back of my mind. So I never really read celebrity biographies no matter how much I respect or adore the person writing them. However, last year that all changed when I couldn’t stop buying them. In the space of a few weeks I bought Born to Run by Bruce Springsteen, Believe Me: A Memoir of Love, Death and Jazz Chickens by Eddie Izzard and How Not to Be a Boy by Robert Webb. In an attempt to silence that inner voice telling me ‘it’s not their real voice’, I bought all three books on Audible as well as owning a physical copy. I hoped that hearing the writer speaking his own words would bring the whole experience together for me. Besides, all three of these men have distinctive and delightful voices that I definitely wouldn’t mind streaming into my ear holes.

Cut to January 2018: I’ve just finished The Power and have the idea of gender equality in the forefront of my mind. For anyone who has read my review of Naomi Alderman’s feminist novel will know I wasn’t blown away with her attempt to switch the gender roles. So I decided to see what one of my favourite comedians would have to say about the subject. Although, as interested and passionate as I am about the fight for gender equality, I can’t say that I picked this book up to find out where Robert Webb stood on the matter. After all, I read the New Statesman article that started this whole thing so have a shrewd idea of what he’d say. No, I shamelessly picked this up because of my sheer love for the writer. I’ve been a fan of Mitchell and Webb since I first watched Peep Show and heard their BBC radio sketch show. If there was going to be a good place to start with this new world of celeb memoirs then this was it.

How Not to Be a Boy traces Robert Webb’s upbringing in rural Lincolnshire to his time at Cambridge University to finding fame as a comedy writer and performer. It notes his romantic failures and successes until he eventually figures it all out, gets married and has two daughters. In retelling his life story, Webb hopes to explore his relationship with the gendered expectations that haunted him throughout his life. As a child, Webb didn’t fit into the same masculine mould that his father or brothers so easily did. The older he got the more aware he became that he was failing to play the part that was expected of him. So, in many instances, he began faking it. Until he realised that, despite everything, he had fallen into the trap of toxic masculinity that he was trying to avoid.

Webb grew up with a father who was an angry, adulterous drunk. He and his two brothers were subjected to his moods and violent outbursts until their mother found the strength to divorce him. When she died years later, the wannabe comedian vowed to get into Cambridge University and become famous to make her proud. This goal haunted his every moment but he became blinded to how it negatively affected his attitude and actions. He became distracted from his education and gained something of an ego the more successful his comedy became. As for his romantic relationships, when he wasn’t struggling with his bisexuality, he was treating women appallingly in the hope that he could live up to the sexual and (un)romantic expectations associated with his gender. Toxic masculinity is given as the reason for Webb’s own faults and his father’s terrible actions towards his mother. It is never used as a way to justify them, however. Webb admits that he has had his problems but is actively doing his own bit to change.

How Not to Be a Boy is more than your average celebrity memoir as everything that Webb discusses comes back to the fact that so much of society is weighted down in gender conditioning. This book was a response to Caitlin Moran’s work that discussed the restrictions society places on women. Men are equally as trapped by these outdated conventions and, no matter how progressive we all like to think we are, there is sometimes no getting away from it. Girls are taught what is expected of them early on just as boys are discouraged from showing emotions, talking about their feelings, or admitting they were wrong. Webb’s book is a funny and often heart-breaking account of the ways that the expectations unconsciously placed upon him at birth impacted his life. It can be a tough read but Webb deals with his most awkward phases with his tongue firmly in his cheek. There were moments when I became genuinely emotional and moments when I found it hard to like him. It’s safe to say I loved reading this book and listening to Webb’s ideas regarding gender.

Everything in this book is enough to make you think but I can’t pretend this is ever going to start a revolution. It’s worth a read, certainly, but as a study in gender conditioning it only just scratches the surface… but I think Robert Webb would be the first to admit this himself. What this book really is, is a stepping stone to understanding, on a deeply personal level, how toxic our ideas of gender really are. How Not to Be a Boy is written without judgement on anyone in particular but written with a sadness that society, as a whole, has got to this point. Even when he criticises people like his father, Webb is always keen to be fair in his portrayal. Not everything is as simple as it seems. With his book, Webb isn’t starting a call to action. He is simply questioning modern manhood. His style of writing and relaxed tone will resonate with plenty of people and, potentially, help them to reevaluate their own view of the their gender. It is not the end of a long fight but the start of an important conversation.

How could I not? It was 2 for less than the price of 1!
BOOK REVIEW: Tyger by S.F. Said
I loved this. It's bound to be a classic.
If all goes well this month, I'll finally cross this off my TBR. Of course, the chances of it going well are pretty slim if my past behaviour is anything to go by.
My negative reviews sometimes get quite brutal. I have to learn to control myself a bit.
Isn't this just beautiful? I can't wait to read it. It sounds so good.
This sounds amazing. Of course, I say this about every new book that I buy. They all end up just sitting on the shelf like all the others.
What are you reading this month?
Justifying every new addition to my TBR.