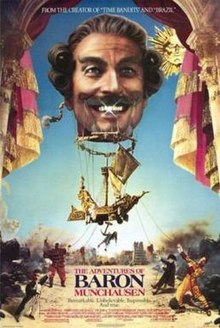 Back for the second in my new series Throwback Thirty. Where I randomly pick a film from 1988 and review it in honour of my upcoming 30th birthday. Self-obsessed? Maybe. Fun? Well, that depends on the film really. There’s a mixed bag of serious and silly in my jar so I do have a slight fear every week that it’ll be something I’m not in the right frame of mind for. As much as I wanted to pick all of the shittest and strangest films I could find, I decided, if I was going to do this, I should at least do it properly. This means there are a fair few films that I’ve not seen. Including today’s pick. I’m a fan of Monty Python because, let’s face it, who isn’t a fan of them? Not only am I British, so it’s in my blood, but I’m a huge fan of weird humour. And it doesn’t get much weirder than those guys. Still, my love of Python hasn’t completely pushed me towards the films of Terry Gilliam. I’ve not seen them all and it’s mainly because I don’t know where to start. Gilliam has had a mixed career as a director in the minds of many people but also hailed as a genius. The Gilliam I’ve seen has also been a mixed bag. So I was quite excited about the prospect of watching this film. It is infamous for having a troubled production and bombing at the box office. If I’m going to work my way through Gilliam’s back catalogue I might as well start here.

The Adventures of Baron Munchausen is a fantasy film that made a name for itself by going over its initial budget, traumatising its young star, and making very little money at the box office. However, it was also praised by critics and won four Oscars. It is the third film in director Terry Gilliam’s ‘Trilogy of Imagination’ following Time Bandits and Brazil. All the films deal with the constant battle between fantasy and reality; the need to escape reality through your imagination. That is why Gilliam has made a film about the fictional German nobleman created by writer Rudolf Erich Raspe. These tall tales see the fictional Baron carry out insane feats as a sportsman, soldier and traveller.

In Terry Gilliam’s film, the Baron must bring together his old allies in order to stop an angry Ottoman army attacking the city he is hiding in. The Baron first turns up in the middle of a performance depicting some of his more fantastical adventures and he promptly takes control of the performance to tell the audience the truth of the matter… until he is rudely interrupted by canon fire. With the help of young Sally Salt, the daughter of the leader of the theatre company, the Baron agrees to track down his former companions in order to save the city. He has not seen his four associates for many years but their particular talents will be vital in stopping the invading army. There is Berthold, the world’s fastest runner; Adolphus, a marksman with superhuman eyesight; Gustavus, who has amazing hearing and strong enough breath to knock a whole army off their feet; and the insanely strong Albrecht. Their journey takes them to the Moon, the inside of a volcano, and in the belly of a sea monster.

I can see why so many people praised this film but can also see why it was a nigtmare to make. The Adventures of Baron Munchausen is visually astounding. For a film made in 1988 there are some insane special effects that still look impressive to this day. It’s quite phenomenal to watch. Everything about it is pure Gilliam and there are some incredibly witty and silly moments throughout. It’s a colourful and fantastical treat that will leave anyone feeling lighthearted by the end of it. It’s one of those films that looks so effortless and with such a light touch that you wouldn’t believe it caused so much strife. I adored this film instantly.

Well, maybe not instantly. I have to admit that the plot takes a bit of time to get going and, even when it does, the narrative is all over the place. It doesn’t always follow the best line and takes a few missteps along the way. It would be easy to get lost but, if you did, at least you’d have more than enough to appreciate. Not least the performance of John Neville in the title role. Neville plays the over-the-top Baron in a very laid-back and careful way and it totally pays off. He never becomes too ridiculous or off-putting. Through his performance you can see why everyone instantly loves the Baron. The rest of the cast, though, are mere passing thoughts and never really get anywhere. The plot and characterisation are really just something to justify the visual effects.

But, when it’s a film that looks like this, I don’t necessarily think that’s a bad thing. Yes, there were times when I wished the plot would move forward and there were moments I wish had been better explained. However, there were no times when I did find it enjoyable. Watching this film was an experience I’ll never forget despite the fact that I wasn’t on the edge of my seat. The concept behind this film was so ginormous that I think it can be forgiven for losing its way slightly. Besides, if you finish a Terry Gilliam film and you’re not a little bit confused have you really seen a Terry Gilliam movie?

One thought on “Throwback Thirty: The Adventures of Baron Munchausen (1988)”