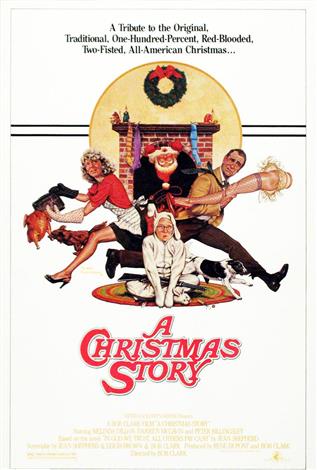 Everyone has their own favourite Christmas film. It’s a deeply personal and, often, confusing thing. I, personally, don’t understand why anyone would say anything other than The Muppets’ Christmas Carol but there are some weirdos out there. Love Actually is one of the those films that genuinely baffles me. There is so much love for that film but, when you really look at it, it’s just awful. I know people who willingly watch it repeatedly throughout December. Who would do that to themselves? Netflix should stop trying to shame fans of A Christmas Prince and starting calling out the people who are watching Love Actually again and again. They’re the real worries. Alongside the more contemporary Christmas viewing there are the real classic Christmas films that people just adore. Although, not all of them seem to be as popular over here as they are in America. I don’t know why but it feels like A Christmas Story hasn’t really translated to the UK market in the same way that most other Christmas films have. Every year I see and hear loads about it but, up until recently, I’d never seen the film myself. I knew quotes from it but had no context for them. After a recent prompt for an Instagram challenge I’m doing this month referenced the film, I decided it was finally time to watch it. After all, people seem to bloody love this film. Why else would it be played over and over for 24 straight hours? Oh god, imagine a world where somebody starts doing that for Love Actually? I couldn’t cope.

Now that I have seen A Christmas Story I have to say, I don’t get it. I was so ready for it to be the greatest thing I’d ever seen but I just don’t get it. I mean, it’s a fine collection of stories and all but it’s nowhere near as funny or endearing as I’d been lead to believe. The film is narrated by adult Ralphie Parker as he reminisces about the Christmas he had when he was 9 years old. Specifically about how desperate he was to get his dream present: a Red Ryder Carbine Action 200-shot Range Model air rifle. Unfortunately, as he’s only a fucking kid, most sensible adults see this as a bad idea. Ralphie isn’t one to be stopped so tries every trick he can think of to convince his parents that it’s a good idea. Along the way, there are several smaller plots going on including Ralphie’s father winning a ridiculous prize in a competition, an ongoing joke concerning his dad and the neighbours’ dogs, Ralphie’s encounters with the school bully, and a brief encounter with some ill-advised swearing.

A Christmas Story is a very odd film that attempts to win favour with its nostalgic setting and fairly twee sensibility. The story is set around the 1940s so there is a slightly magical feel to everything. It’s a little historic whilst being incredibly familiar. Hearkening back to a time when Christmas was much less commercial and families thought about the more important things. Although, there is something quite off-putting about the setting. It feels too forced. I just couldn’t get on board with it. I like nostalgic TV but it has too feel natural. Take something like Mad Men, which makes the historical references work within the context of the story. A Christmas Story just seems to be using the past as a way to create a feeling that it is unable to generate naturally. Using nostalgia to create a festive ambience.

It’s not as if there aren’t good moments in this film but they are somewhat outweighed by the bad. For all the jokes that land fairly well, there are far more that just feel forced or cringey. There are parts of this film that make me feel so uncomfortable because they’re so bad. Like the moment Ralphie’s father is opening a crate and misreads the word “fragile” for no reason whatsoever. It’s not funny or silly. It doesn’t make any sense. Just like the whole film. I get that it is supposed to have the feel of several small vignettes coming together to create a festive treat but it just feels too disparate. There is nothing, other than Ralphie, that really ties these stories together. It just feels badly edited and unconnected. And super long. It’s not actually that long a film but watching it felt like a fucking marathon. I can’t imagine how long a 24 hour repeated watch would feel.

I guess it’s entirely possible that I’m missing something that I’d get if I was in America. Maybe that’s why the film hasn’t really made it over here. Something fundamental has been lost in translation. All I do know is, this film certainly won’t make it into my yearly festive rotation of films. It’s not the worst Christmas film I’ve ever seen but it’s certainly not an experience I’m keen to repeat.