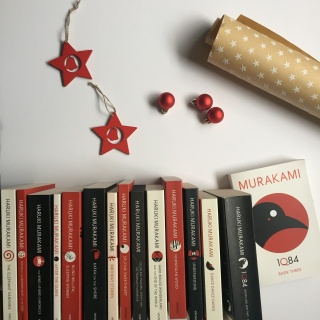 Christmas is only 5 days away and I’ve only got 3 days at work until I have a whopping 2 days holiday. Woo! Yep, I’m on the late shift on Christmas Eve and then back in work at 6am on 27th December. I never get a Christmas break as I’m always called upon to do this gem of a shift. It sucks but my manager’s aren’t willing to change their ways. Still, I am desperately trying to get in the festive spirit by watching Christmas movies, wearing Christmas jumpers, and endlessly listening to festive jingles. It works some of the time but, as anyone who works in any kind of retail/hospitality job this time of year knows, it’s hard to not let the season of good will break your spirit. No matter how many times I play my favourite Christmas song on repeat. Speaking of, what is your favourite Christmas song? I read an article recently that made the bold claim that the best was officially All I want for Christmas is you by Mariah Carey. I really doubt the validity of their statement because I, for one, wasn’t asked my opinion. I fucking hate that song and, whilst I’m at it, I hate Fairytale of New York too. It’s not cool to like it because it promotes alcoholism and includes swearing. It’s a shit song that doesn’t promote the festive spirit. My number one? Christmas Wrapping by the Waitresses or anything featuring the Muppets. I’ve got simple tastes. As you’ll see in yet another Christmassy book tag.


1. “You’re a Mean One Mr. Grinch”: Name a villainous character you couldn’t help but love.

What’s that It Crowd quote? “All women love a bastard”, right?! Well, in certain circumstances that’s true. Villains are just more interesting than most good guys. I mean look at Harry Potter. I’m far more interested in the likes of Bellatrix and Lucius Malfoy than I am in Harry himself. Harry’s a whiny, egotistical classic chosen one. I can’t stand him most of the time. I guess when it comes to the ultimate bad guy you can’t help but love I’d have to go with my traditional answer: Humbert Humert from Lolita. I’m not saying I actually love him but there’s something about Nabokov’s narrative that means you end up kind of sympathising with a disgusting paedophile.

2. “All I Want for Christmas is You”: Which book do you most hope to see under your Christmas tree?

There’s always loads of books I want but I don’t often get them because I’m useless at giving hints. I guess the ultimate goal is the second and third illustrated editions of Harry Potter and the Visual Editions’s version of Don Quixote. All very gorgeous and all over my personal book price limit.

3. “Rudolph the Red Nosed Reindeer”: Name a character that overcomes major obstacles and learns to believe in themselves.

I feel like my answer to this isn’t going to be that original but, when you think of character development, isn’t it Neville Longbottom than first comes to mind? Look at how far he comes from the scared loner with no friends other than his toad to a strong young man who is leading the DA in a Death Eater filled Hogwarts. He’s a great guy. A much more deserving hero than fucking Harry.

Naughty List: Is saying every literary villain ever a cop out? What a silly question. Anyone who is vaguely bad should be on the naughty list but how to you quantify naughtiness. Who would be the top? Some kind of serial killer like American Psycho’s Patrick Bateman? Or Sauron from Lord of the Rings? Nah, how about Ramsay Bolton from A Song of Ice and Fire? He organised the Red Wedding… there’s no way Santa can even try to forgive that.

Nice List: Again, every hero or nice person in any novel ever. But, purely in the name of playing the game, I’m gonna say Winnie the Pooh. Why? It just popped into my head but that guy always tries to do the right thing. He’s niceness personified.

5. “Frosty the Snowman”: Which book just melts your heart.

I’m not much for the melty-heart kind of books these days. I prefer my novels to be hard hitting and dark. So much so that I’m drawing a major blank on this answer. It probably says a lot about me. I’m a fucking ice queen. I guess, if I were pushed, I’d probably say the Sophie books by Dick King Smith. I was obsessed with those books as a child and they’re so adorable.

6. “Feliz Navidad”: Choose a book that takes place in a country other than your own.

Anything by Haruki Murakami. Let’s say Norwegian Wood. I know that I don’t have enough diversity in my reading material but I’m trying to be better. It’s just that my TBR is kind of full of books written by white men and women. It’s always a question of trying to clear that or be more adventurous. I’m just drowning in books.

7. “It’s the Most Wonderful Time of the Year”: Which holiday themed book do you use to spread the Christmas joy?

I think A Christmas Carol is a great read and, probably, a book that people won’t be as familiar with as they think. Dickens’ original tale is a lot darker than many adaptations allow. The scene with Ignorance and Want is actually quite disturbing. But, it can’t be denied that the Christmas message runs through and, let’s be honest, it provided the basis for the greatest Christmas film ever made.

8. “Sleigh Ride”: Which fictional character would you choose to spend the holidays with (doesn’t have to be a love interest!)

I know it says one character but I’m just going to say the Weasley family. Imagine spending Christmas at the Burrow? It would be so cosy and full of love. Molly rushing around preparing food. Fred and George pulling pranks on everyone else. Arthur enchanting some muggle fairy lights. It’d be brilliant. If we’re talking romantic Christmas then I’ll have to leave the bookish world and say Chief Hopper from Stranger Things. My passion for that man is so strong. I’d spend Christmas with him in his cabin finding fun ways to keep warm!

9. “Baby it’s Cold Outside”: Which book that you didn’t like would you sacrifice to a fire to warm yourself up in the cold?

Which book would I burn? Now normally I’m against damaging any book, no matter how terrible, but there is one book I’ve read this year that leaps to mind. One of Us is Lying is the most offensively bland and unoriginal book that I’ve ever read. It deserves to be destroyed in a horrible way just for being so fucking blatant. Urgh, I’ve never hated a book this much and I did a whole course on novels of sensibility. Those books are super sexist.

10. “Do you hear what I hear”: Which book do you think everyone should read?

Oh loads. The one I’m always pushing on people is The Monk by Matthew Lewis because it’s fucking crazy. I love it. However, my books of 2017 have to include First Love by Gwendoline Riley and Lincoln in the Bardo by George Saunders. I’d recommend reading First Love and listening to the audiobook of Saunder’s Man Booker winning novel. I adored them both in very different ways.

"It would be a dull world if we all thought alike."
Thank God it's Folio Friday!
I may have made a mistake with this purchase because I've not got a great track record with this genre. It just sounded irresistible. A dinner party and a murder? Exciting.
Do you have a favourite Kazuo Ishiguro novel?
I'm not setting an official TBR this month after what happened last time. However, I will possibly probably get around to reading this in April maybe. It's something I've been meaning to get around to for a while and I will need a P title for my Spell the Month Challenge.
Today's review went up on the blog this morning.
Happy Easter everyone!
What are you reading over the Easter weekend?
Good Folio Friday everyone!