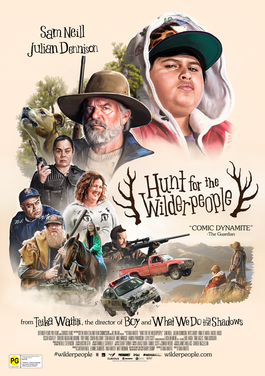 You may have gathered from my review of Thor Ragnarok on Tuesday that I fucking loved the film. It was the funniest Marvel movie that I’ve ever seen and was the most enjoyable cinema experience I’ve had all year. I know that, as a massive fan of the Thunder God, it was inevitable that I was going to adore this film but my love of the most recent film in his series of solo films comes from mostly from the work of director Taika Waititi. Waititi has a habit of making films that are as much fun as saying his name over and over. I remember adoring the delightfully weird Shark vs Eagle way back when and his mockumentary What We Do In the Shadows managed to breathe new life into the genre that Christopher Guest has almost single-handedly wore down to the bones. Waititi, as I suggested on Tuesday, was an incredibly unusual choice to make Marvel’s latest big blockbuster. The New Zealand director has preferred to stay away from big productions and has specialised in smaller, quirky comedies. One of which keeps appearing in my Netflix recommendations and catching my eye. I’ve wanted to watch Hunt for the Wilderpeople for ages but, like everything else I see on Netflix, I kept passing over it in favour of watching Stranger Things or Rick and Morty for the umpteenth time. So, I decided, to fit in with my last review, it was a good opportunity to finally watch it. To me 2016 doesn’t really qualify for a TBT post but I think there are times when I can make exceptions. Certain films deserve a loophole or two.

Hunt for the Wilderpeople is the kind of film that grabs you from the start and you are never able to escape from. It introduces us to a Ricky Baker (Julian Dennison), a juvenile delinquent who has ben rejected from all his previous foster families and is now a burden on the Child Welfare system. Welfare services officer Paula (Rachel House) drops him off at his final chance to find a family. Living in a remote farm, Bella (Rima Te Wiata) shows the boy genuine affection and he starts to feel comfortable. Until her untimely death anyway. After than, Ricky is left in the charge of Bella’s cantankerous husband, Hector (Sam Neill). When Pauline warns that she is returning to take the boy away from the farm, Ricky runs into the bush and gets lost. Whilst Hector easily tracks him down, the pair, now being hunted by the law, decide to take their chances in the wilderness so they can remain together. They quickly learn to rely no each other and form an uneasy relationship.

The best way I can think of to describe Hunt for the Wilderpeople is Up meets Wes Anderson and Edgar Wright. It is a film that is incredibly funny, heartwarming and very well made. Everything just works despite it’s quirky and kind of absurd nature. It boasts fantastic performances from its two lead stars and their relationship is what keeps this whole thing together. Sam Neill is phenomenally strong as the man who is quietly grieving whilst also trying to come to terms with this strange teenager he’s been lumbered with. The ups and downs of the pair’s time together is genuinely wonderful to watch and their eventual relationship is so sweet your teeth will hurt for days. It is, however, Julian Dennison) who gets the best lines and offers the most memorable performance. Ricky is a child who dreams of being a gangster rapper so is about unsuited to rural life as it gets. But there is depth to the character as he is, beneath the bravado, just a lost little boy looking for someone to love him.

Although Hunt for the Wilderpeople never strays too far into sentimentality and schmaltz. It contains hard hitting drama and emotional punches when it needs to but, before you have a chance to shed a tear, it will suddenly have you screaming with laughter. Waititi’s characters all inhabit a strange world in which reality is slightly off but so phenomenally funny that it doesn’t matter. Hunt for the Wilderpeople may not have the budget or action as Thor Ragnarok but it certainly matches in terms of entertainment. It deftly works everything together and creates characters that, though flawed, you really care about. It has humanity, humour and heart. It has larger than life characters that feel anything but real. It seems to me that this film alone was the perfect precursor to any Marvel film. Maybe I’ll have to revise my statement’s on Waititi’s hiring?