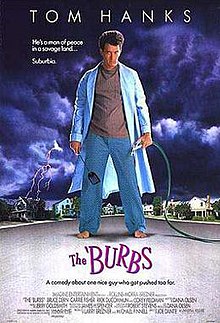 Without being too mean, my neighbours are weird. Well, the mother is super weird. She has this incredible obsession with her garden, which causes her to lose her mind every so often. At the end of October it was fucking windy as Storm Brian passed over the UK. Overnight the weather went mental and blew over a few of her plants. The wind didn’t really let up for the entire weekend but that didn’t stop my insane neighbour wrestling with her trees to get them to stand up. It was quite a sight. It’s not the first nor will it be the last time she goes on a crazy gardening rampage. She’s the kind of woman who, when you accidentally cut your hedge too short, will start having an emotional breakdown in the garden because she doesn’t like it. But, hey, we’ve all been there, right? Am I scared that one day her intense love of horticulture will lead to more violent pursuits? Sure. You might say I’m being paranoid but it’s probably got more to do with the fact that I’ve just watched The ‘Burbs. But you have never seen my neighbour. If you told me she had a big collection of bones hidden under her house then I probably wouldn’t be shocked.

I’m going to be honest with you, I’m not really feeling today’s TBT review so it’s gonna be brief. I watched The ‘Burbs because it had come up in a recent conversation and happened to be on Netflix. It was a perfectly enjoyable film. It’s an underrated 80s comedy thriller type thing with starring Tom Hanks, Carrie Fisher, Corey Feldman and Bruce Dern. I mean it’s probably not aged as well as other films from the 80s and the ending sort of loses its way but, for the most part, it does it’s job pretty well. The story is a simple one: a group of suburban neighbours begin to suspect that the new faimly on the block is up to no good. When they operate stranger machinery and dig up their garden late at night, a paranoid Ray (Tom Hanks) decides that his mysterious new neighbours are hiding secrets. Spurred on by the supposed disappearance of another resident of the street, Ray and his friends decide the family are murderers and head out to find the body. Obviously, chaos and hilarity ensues.

So the premise ends up being a fairly interesting and pretty understandable one. Especially in the days when people don’t really know their neighbours anymore. How do we really know what anyone is up to? It’s like on the news when people always say the man who turned out to be a serial killer was a quiet, seemingly normal man. It brings about a certain amount of humour and there are some great moments. It’s not one of Tom Hanks’ most memorable roles but it’s fine. Corey Feldman is perhaps the greatest member of the cast simply because he’s the one that gets to have the most fun.

My only real problem with this film is how far off course it goes. It’s got that 80s thing where it just gets excessively insane without ever really knowing what to do. As the film progresses things seem to get more away from the story and the ending just ends up being a little too weird. It’s kind of like the last few novels Stephen King has released: building up tension to a point where it just goes too batshit crazy to be scary. Although, The ‘Burbs isn’t trying to scare it’s audience, per se, but it does end up taking the parody of a horror film too far. There are better comedy horror films out there but The ‘Burbs has a certain amount of nostalgia to it. It’s definitely not the worst thing to come out of the 80s but there’s probably a good reason it hasn’t really stood the test of time.