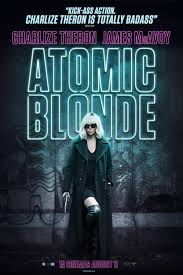 Okay, let’s get the awkwardness out of the way as soon possible, shall we? Charlize Theron is fucking perfect. It’s entirely possible that the only reason I had any interest in this film in the first place was because of this perfection. However, I grew to really want to see the film for itself. It looked liked everything great about the Bourne and Bond franchises but with a female lead and 80s soundtrack. I mean if anything’s guaranteed to get me excited then it’s that. Despite appearances, I’m a huge fan of great action films. Anyone shooting their way out of a situation or beating people close to death gets me super excited. Not in anyway that anyone needs to worry about. I mean I’m not repressing my secret urges to start my own fight club or anything. I just like watching actors fight other actors in screen. Before I saw the film, I watched a behind the scenes video concerning one of the films major action sequences. I’ll be honest, it made me feel things that previously only the sight of Tom Hiddleston’s face had been capable of. Watching Charlize Theron performing her own stunts is now the greatest thing I’ll ever see. If I ever have a near-death experience I want to see that video flash before my eyes instead of my life. She’s a fucking badass. In my mental list of top female badasses, Theron is now competing with my beloved Gwendoline Christie for top spot. Now that’s a fight I’d love to see.

Getting into the spirit of things, I’m listening to ‘Blue Monday’ as I write this review. After all, Atomic Blonde is so wonderfully 80s that you could genuinly believe that you were watching a classic music video. Well, if it wasn’t for all of the super realistic violence. Director David Leitch has gone with a seedy and dark neon aesthetic that really shouldn’t work as well as it does. It’s a sign that this film is, when all is said and done, more about style over substance. Don’t get me wrong, this is a super cool and great looking film but I can’t say that I was overly blown away by the plot. Leitch, after all, is a former stunt coordinator so it is the action sequences that really stand out here. Everything in between just feels like filler. I found myself dozing off a bit every time Charlize Theron and co. got all talky and less punchy.

The narrative isn’t exactly anything new or exciting. Set just before the fall of the Berlin Wall, Theron plays MI6 agent, Lorraine Broughton, who is sent to Germany following the mysterious death of a fellow agent. His murder also resulted in the loss of a crucial list revealing details about a whole bunch of spies, which may or may not be in the hands of a double agent. You know, that all too familiar maguffin we’ve seen causing problems for governments countless times before. Broughton’s contact in Berlin is David Percival (James McAvoy). He’s a super shady and completely unreliable person who always looks like he’s up to no good. It gets a bit of energy thanks to inevitable tension surrounding Berlin at the time and the fact that the KGB always turn up to spoil our heroes fun.
However, there is little about this plot that makes it worthy of being placed alongside such brilliant action sequences. I mean if you really stop to think about the various motivations at play here, things will start to fall apart quite quickly. Then there’s the annoying way the plot is presented. Lorraine tells the story of her time in Berlin in a flashback as she is being interviewed by her superiors. It’s a feature that really doesn’t work. It adds very little to overall storyline except to add on an unnecessary additional layer of intrigue. If anything, it only highlights how convoluted and complicated the main story is. It also takes away time that could have been spent creating more character and depth. Throught the film it always feels like the plot isn’t really a key player in the proceedings. It’s more like the thing that is needed to break the fight sequences up.
Which is probably a good thing because if you had constant action on this scale it would, probably, blow your mind. You may not be able to remember about the a Stasi officer played by Eddie Marsan and you may be a bit hazy about the final identity revelations at the end. However, the action sequences are presented with an amount of realism and care that the rest of the film is kind of lacking. I’m not being hyperbolic when I say that they are the best action sequences I’ve seen for ages. Take the sequence that is presented as a single-shot take, which sees Charlize Theron fighting her way in and out of a Berlin building using anything she can grab as a weapon. The action moves up and down stairs and ends in a thrilling car chase. It has been created thanks to much editing trickery but that doesn’t mean it is anything other than breathtaking. It is moments like that that make it okay that the narrative is so forgettable.
Although, it is the realism of the sequences that I found most exciting. Theron performed her own stunts and everything you see her do on screen is wonderfully realised. It’s not necessarily unusual to see women kicking ass in films but it is rare to see it done at this level. Lorraine gives some great punches but she takes just as many, if not more. Her opponents are all beefy Germans and there are moments where he pain is obvious. Atomic Blonde may be referred to as the female James Bond/ Jason Bourne but she is so much more. Charlize Theron is, perhaps, the only woman who would be able to pull off such a mammoth task as this film. Despite the pummelling she receives, the audience is never in any doubt about Lorraine’s skills. Everything Theron does on screen, including just walking into a room, oozes badassery on a monumental scale. I say, fuck Tom Hiddleston, we have our next James Bond here. And she’ll do it all wearing uber stylish high heels.