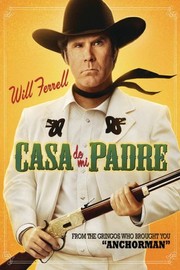 On Tuesday I criticised Will Ferrell’s new film The House for being short at 88 minutes long. Casa di mi Padre undercuts that by 3 minutes. So, if you thought I was harsh to the former then just wait until I get started on the latter. Until I watched it specifically for this review I’d never seen this film before. I used to pride myself on watching every film that Will Ferrell starred in but, over the years, I’ve really become quite lax in my viewing. I think it was probably around the Bewitched era when it just became a bit too much for me. I feel as though I’m on fairly safe ground with any kind of Will Ferrell/Adam McKay combination but the pair only act as one of the many producers for this film. Instead it is a combined effort of ex-SNL writer, Andrew Steele’s, script and Funny or Die co-creator, Matt Piedmont, in the director’s chair. I can’t say that, after seeing the disappointing results of a union between Will Ferrell and Amy Poehler, I wasn’t exactly excited to see this. Especially when it couldn’t even find enough comedy to fill a 90 minute running time. Then again, maybe it’s just so well-developed that anything over 85 minutes would be too much for the audience to handle? It’s possible, right?

You know that Will Ferrell character who starts off being a mild-mannered, lovable loser who is forced to become a badass? You might well ask “which one?” because, these days, it’s fucking all of them. He’s the guy we saw it in The Other Guys, The House, Get Hard, and Daddy’s Home. No doubt there are countless others that I just never got round to seeing. Casa de mi Padre is different, though, because Ferrell turns into a badass whilst speaking Spanish. Genius! Casa de mi Padre is the telenovela parody that nobody wanted or needed Ferrell to be a part of. A film that combines subtitles, an impressive cast, including Gael García Bernal and Diego Luna, an utterly silly narrative and, underwhelming jokes. What’s not to love?

We have seen Ferrell take on many unlikely guises over the years but this has to be one of the more out there ones. He plays Armando Álvarez, a Mexican rancher on his father’s cattle ranch. His world is turned upside down when his younger brother, Raúl (Diego Luna), returns to the homestead with a beautiful fiance, Sonia (Génesis Rodríguez), in tow. Armando not only instantly falls for his future sister-in-law but discovers that his brother is a drugs dealers who has come back to finish his war with fellow dealer Onza (Gael García Bernal). When Sonia is put in danger, Armando has to prove himself to everyone who saw him as the useless brother.

It’s hardly the most exicting or original story we’ve ever seen but that is probably more to do with the genre it is parodying. This isn’t really a film that wants to do something new and exciting but that wants to give Ferrell and co the chance to go all out with their performances. The problem is, there isn’t enough within Casa di mi Padre to get a lot of laughs out of. That’s not to say that there aren’t any enjoyable moments in the film but they are few and far between. Most of the humour is forced through obvious spoofs of the television dramas it is based on. There are dodgy backdrops, ‘hilarious’ bad continuity, and terrible editing. Still, there are a couple of memorable moments that will get more than a mere titter form the audience. It’s just a shame that there aren’t more.

Honestly, there is never a point where Casa di mi Padre feels like a real film. It’s more like a sketch that really outstays it’s welcome or a fake trailer that would briefly go viral before becoming irrelevant. Unfortunately, it is a real film and it stars real actors. They all give it their best shot but there is just too little for them to work with. It never really strikes a balance between serious or silly. Ferrell always gives 100% to every part he plays but there isn’t enough to Armando for it to ever come to anything. His Spanish lines always feel too awkward to feel real but not silly enough to feel intentional. This could have been a wonderful and fresh comedy but it just feels cheap and pointless.