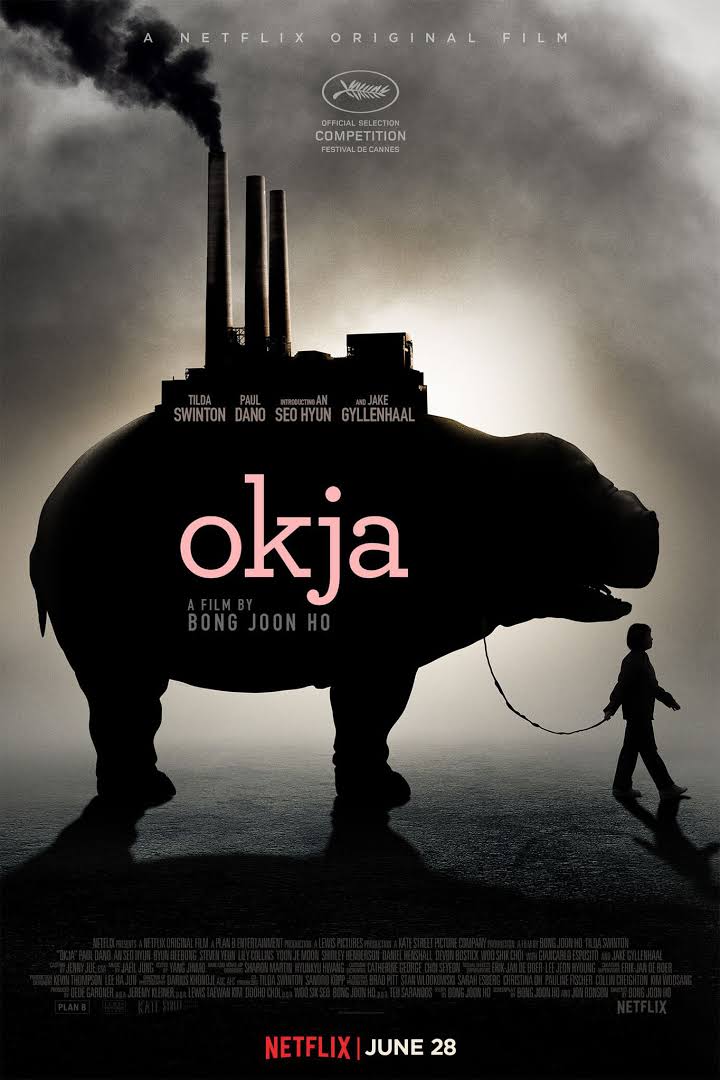 Since Netflix started making original films there have been more than a few duds. The online streaming site is really good at certain things, like Marvel TV series, documentaries and original sitcoms, but the majority of the original films that I’ve watched have been underwhelming: The Circle was fucking awful; Mascots was fun but nothing to really get excited about; The Fundamentals of Caring was sweet but unambitious; and Special Correspondents was the worst Ricky Gervais film I’ve ever see and that’s saying something. So it was really refreshing that one of its recent releases, Bong Joon-ho’s Okja, was competing for the Palme d’Or at this year’s Cannes festival. Refreshing for about 30 seconds, obviously, because, as we all know, the shit really hit the fan soon after. Okja‘s inclusion in the list of Palme d’Or candidates created much controversy when the judging panel suggested that the film’s release on Netflix meant it shouldn’t be eligible. When the film was opened to the press it received boos from the audience and suffered from technical issues. Still, this did nothing for the film’s reputation and, in its official opening, the film got a standing ovation from the audience. Everything was looking good for Okja being a rare Netflix hit.

I have always been meat-eater. I mean, apart from my time at university when my finances dictated that I ate vegetables instead. I like eating meat but having to buy Sainsbury’s Basics mince was something I just didn’t want to consider. I grew up eating meat and have continued to do so into adulthood. It just feels normal and natural. Although, I’ve recently started feeling myself getting more and more swayed towards a meatless lifestyle. It all started earlier this year when the BBC showed a mockumentary by Simon Amstell called Carnage. The film is a satirical look into a future world where everyone is vegan. The characters look back at society’s past and the way that people lived. Carnage was not only incredibly funny but it was also brilliant in explaining veganism in a non-preachy way. We’ve all met those vegans who lecture and brag instead of trying to soundly persuade people about their way of life. This ignored them. After I watched it, I genuinely started to question what my life of eating meat has done to my carbon footprint and to think about how easy I’d find it to stop.

And I do think it would be easy. I like meat but I could happily survive without it. I definitely know I’d struggle with full veganism (because, you know, cheese) but I could dramatically reduce my meat intake and be okay. Nevertheless, I’ve always gone back to chowing on dead animals whenever I could without even thinking about it. Then I watched Okja and the feelings came flooding back. The new film from director Bong Joon-ho uses science-fiction to ask real questions about where our food comes from and the consequences of our modern diet. It explores the dangers of genetically modified meat and creates an important narrative about the future. They may be CGI super-pigs but the slaughterhouse scene made me regret the deaths that have allowed me to wolf down a lasagna whenever I fancied.

Because, at its heart, Okja is a sweet tale about friendship. This story of the young girl and her mythical animal companion could very easily be a new offering from Studio Ghibli. Certainly the opening scenes when the Okja, the genetically engineered “super-pig”, is seen romping with her best friend, Mija. Mija is the granddaughter of the farmer entrusted to raise Okja for the Mirando corporation for a duration of 10 years. During this time the duo became firm friends and care deeply for each other. When Okja is retrieved by the company, Mija follows the creature all the way to New York in order to bring her home. See, doesn’t it sound like a fucking Disney film or something? The relationship between Okja and Mija is a beautiful one. We’re rooting for them both from the offset.

Unfortunately, the super-pigs were created so the head of the Mirando corporation, Lucy Mirando (Tilda Swinton), can present them as an answer to world hunger. The creatures are supposed to have a low-carbon footprint by eating less and reducing emissions. They are also meant to taste “fucking good”. Okja is to be their big showpiece for the press conference so she has to be taken from her home. When it leaves Korea for America, the film starts to go through a tonal change. The sweet and lovely tale of two friends takes a darker turn as we meet the animal right’s activists who are attempting to reveal the secrets of the Mirando corporation and save creatures like Okja.

In terms of tone there is a fair amount of jerking back and forth throughout the film which some may find disconcerting. The tale of animal/human friendship is a massive contrast to the violence and scenes of animal slaughter that we witness. It won’t be for everyone but, for those that stick with it, Bong Joon-ho handles everything beautifully. The film never moves too far one way; it always remains light during the darker moments but never lets you forget the message it is trying to send. Which, you’ll be glad to know, isn’t a message of vegetarianism. No, Okja isn’t trying to force its audience to stop eating meat but is bringing down the curtain on the supposedly caring companies who are offering “ecological solutions” to make an easy buck. Something that works remarkably well thanks to the dual role of Tilda Swinton as Lucy and her twin sister, Nancy. The former presented as the caring, green one whilst the latter is a ruthless businesswoman. They both epitomise the alternate sides of their business and, together, paint a horrible picture of the lies the consumers are being fed.

Swinton is a delight in both roles and is joined by an equally superb cast. Jake Gyllenhaal is fabulous as the TV personality and zoologist, Dr Johnny Wilcox, who has become the sorry face of the company. Then there is the calm but engaging Paul Dano as the leader of the activists. Of course, it is An Seo Hyun as Mija who really gives this film the heart and emotion that drives it. She represents a wide-eyed innocence but with a strong determination. She is small in stature compared to the people around her but she creates a stark figure on-screen. She brings a reality to her CGI co-star and you believe in the love she holds for the creature that doesn’t really exist. You willingly follow her journey to rescue her friend and take her back to their idyllic mountain life.

Frankly, after watching this masterpiece I really don’t care what the Cannes judges say about films that were released on Netflix. Okja is the best thing I’ve seen in a very long time. It is a beautiful film that presents a unique, engaging and important narrative. Yes, it’s the kind of film that I wish I’d seen on a big screen because it deserves that treatment. It was made to be watched in a dark room on a huge screen surrounded by strangers experiencing all of the different emotions that you are. However, it is the kind of film that could only have be made through Netflix. Bong Joon Ho was given the freedom to create this film his way and go with his gut feelings. It’s what makes the film work. This would have been torn apart by any film studio. So, I’m more than happy to watch it on Netflix. It’s sensational.