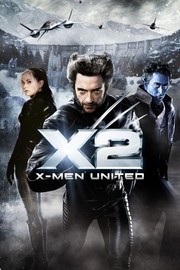 If you’d asked me before I saw Logan last week, which film in the X-Men series was my favourite I would have confidently answered “Bryan Singer’s second film”.  It took all of the good things about the first film but made them much better. It also has one of the best endings to a comic book movie ever. The fact that Brett Ratner fucked it all up is another story. It still remains a fucking awesome cliffhanger. X2 is a remarkable sequel that manages to break the rule that the second films always fair worse than their predecessors. It is clever, well written, well acted, and has some of the best action sequences you could hope for. This post marks the moment that I’ve finally posted a review of all existing films in the X-Men franchise. I’ve seen some great films and some not so great films. This remains one of the best. Had it not been for Hugh Jackman’s swansong this year, X2 would have remained the very best.

X2 picks up where Bryan Singer’s first film left off. Wolverine (Hugh Jackman) is still trying to piece together his forgotten history thanks to the information Professor Xavier (Patrick Stewart) found in his head. Magneto (Ian McKellen) has been captured and is being held prisoner by the deadly Colonel Stryker (Brian Cox). Handily, Stryker was also the man responsible for giving Wolverine his adamantium skeleton so, when Professor X and Cerebro are taken by Stryker for his evil plan, the mutton-chopped anti-hero is more than happy to help track him down. Unfortunately. he finds that he must accept help from the X-Men’s greatest foe when Mystique (Rebecca Romijn) breaks Magneto out of prison. Hence, the secondary title of this film: X2: X-Men United.

In keeping with the theme of the original comic books, Byran Singer’s film making certainly evolved between the making of X-Men and it’s sequel. The first one was criticised for being kind of unsure of itself and it was believed that Singer wasn’t the right man to make a big budget, Hollywood action film. Thankfully, he got more comfortable with the sequel and managed to create one hell of a film. I mean look at the fucking opening sequence. In a franchise that in recent years has given us the unforgettable Quicksilver prison sequence, the attempted Presidential assassination by new mutant, Nightcrawler (Alan Cumming) still looks fantastic today. It’s kind of breathtaking and really well made… and it was made 14 years ago when films effects were nowhere near as advanced as today’s. Something you can definitely tell whenever Wolverine stands in front of the green-screened Alkali Lake. But, the sequence where Nightcrawler evades Secret Service agents is just mesmerising.

This is X-Men but just that little bit more amped-up. It is bigger, louder, more ambitious and more exciting. Action becomes a key part of the film and there are several impressive sequences that range in size and complexity. It is a darker film without ever straying beyond it’s PG-13 status. After watching Logan I couldn’t help but wish that it had been the R rated wonder that the latter film turned out to be. We could have saved ourselves a lot of time. Still, X2 feels more comfortable being a comic book movie than X-Men ever did. It still has the same maturity that made the first film seem so good but it also understands that it needs to let got once in a while.

X2 is a longer film than the first and has a greater array of characters to introduce to the plot. These are mostly handled really well and there is never a sense that there are too many personalities on screen. Each of the X-Men get there moment to really show off their power and are able to reengage with the audience. In fact, it is only Lady Deathstroke that is really wasted here and even she gets a pretty awesome fight scene. I mean Cyclops is obvsiously given short-shrift here but I like to think that’s mainly because he’s naturally a little bit boring. Cool, don’t get me wrong, but not the stand-out player in anyone’s (comic) book.

What X2 does really well is continue the political and social elements that X-Men sets up. The film continues with the idea of segregation and a dersire to wipe out the mutant race entirely. It plays with themes from modern history and creates a story that is more than just good guys beating up bad guys. Considering it is such a huge blockbuster, the scenes that resonate the most are the more personal scenes that deal with these themes. Just take the scene in which Iceman (Shawn Ashmore) “comes out” as a mutant to his parents. It is such a clever, funny, and familiar scene that it gives the classic comic book heroes a more realistic and time appropriate feel. The script is incredibly clever and the actors all play their parts incredibly.

Although, I won’t pretend that X2 is perfect. There are problems with the final act and some loose ends are tied up a bit too quickly or roughly. It’s structure is a bit disjointed and there are certain elements that could have run smoother. However, it is without a doubt the best X-Men related movie to ever have been made… until 2017 that is..