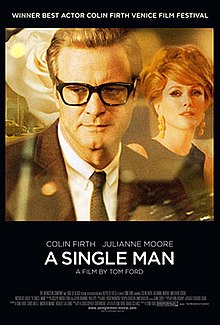 As I mentioned in my previous posts this week, I’ve been away for a few days this week. I got back home yesterday evening and it was my intention to watch something for today’s post once I was unpacked. What actually happened was me lying in bed for an hour unable to do anything. There was a point when I had no energy or inspiration to even contemplate completing something to post. Still, as I’m such a consummate professional I managed to get my act together and rewatch a film I hadn’t seen in ages. Following on from Tuesday’s review of Carol I wanted to revisit another beuatiful film that deals with LGBT issues… cos, you know, neatness. A Single Man was a film I loved when I first watched it but, clearly, just never felt the need to watch again. I’m the kind of person who watches certain films to death and eventually start to resent them for being so familiar. Although, the films in that category don’t tend to be the best films. They’re normally the guilty pleasures that I have a craving to watch. As much as I’d love to watch Oscar winning films again and again, my love of cheese and simple humour overrides everything. So, it turns out, this TBT post is actually doing me a favour and giving me the chance to remember films that I might otherwise have never watched again. It makes me super glad I summoned up the energy to get this review written.

I have a confession to make: I’m not the biggest fan of Colin Firth. That’s not to say I don’t appreciate his skills as an actor but I’m just a bit biased against him. I think it’s mostly due to how many women fawn all over him because of Pride and Prejudice. He was a fine Mr Darcy but I definitely didn’t go weak at the knees when he emerged from that lake. I kind of feel that Firth’s misplacement as a sex symbol has affected my opinion of him. I’m not saying it doesn’t make me a terrible person but it’s the truth. So, I never get too excited about seeing him do something dramatic and serious. I forget that, actually, he’s really good. There are moments in Tom Ford’s A Single Man in which the actor is effortlessly able to get a complex mixture of emotions across to the audience without ever opening his mouth. It’s quite breathtaking.

In A Single Man, Firth plays George, a college professor, who is still dealing with the death of his partner, Jim (Matthew Goode). The film marks one day in George’s life as he goes about his daily tasks having just accepted that they will be his final moments on Earth. As George sets about sorting out the loose ends in his personal and professional life, he flashes back to his life with Jim and the massive hole he has been unable to fill. In between the final errands, he has encounters with his lifelong friend Charley (Julianne Moore), who has been in love with him for years, and his young student, Kenny (Nicholas Hoult). George starts to see the world in a different way and isolates the brief moments of beauty and life that he sees, supposedly for the last time.

A Single Man is one of those films that, on the surface, seems simple and unexceptional. However, it has the ability to get into your head before you know what’s happening. It will speak to so many familiar and long-forgotten feelings in everybody. The way it handles the themes of life, love, and loss make them all seem new instead of the same old thing. A Single Man takes a fairly ordinary story and allows it to transcend to something greater. The main reason for this being Colin Firth. His performance is the thing that holds the narrative together and gives every scene such depth. So much of this film is held on Firth’s face and it manages to hold back everything whilst telling us everything we need to know. George, as a gay man in 1960s America, is used to hiding his true feelings but, after being shut out of Jim’s funeral, he has finally reached a point where he no longer wants to be invisible. Firth’s performance is strong, affecting, and heartbreaking.

Of course, everything about this film is beautifully put together as one would expect from fashion designer Tom Ford. However, despite what a few miserly critics may have said at the time, this isn’t just style of substance. Yes, the aesthetic in A Single Man has been carefully considered and is fantastic but it all serves a purpose. This is a film about people who paint a picture for the outside world to hide the truth bubbling away under the surface. It is a film that deals with the most gut wrenching grief and portrays it in such an astonishingly beautiful way. Ford understands the bitterness to this story and the visuals only help to make them stand out. We see George acting as the person that he needs to be to get through his life and that includes the picture perfect lifestyle. In order to remain safe and invisible, everything in George’s life must be perfect. It is only in his grief that things start to fall apart and George’s actions start to stand out against the picturesque backdrop.