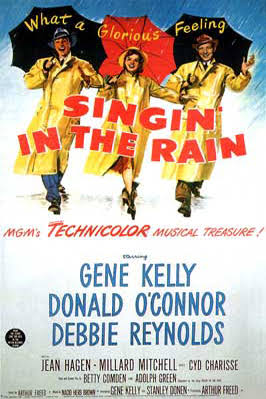 This has been a week of great losses. With actress Liz Smith leaving us on Christmas Eve, George Michael’s death on Christmas Day, and Richard Adams dying on 27th December it was already bleak. Then we had the absolutely devastating news that Carrie Fisher had passed away on December 27th after being in hospital for 4 days. Finally. only 1 day after her daughter, the legendary actress Debbie Reynolds died of a suspected stroke yesterday. It’s heartbreaking news and I can’t imagine how their family are coping with everything. Both women were iconic and important in their own time and the world is a sadder and darker place without them. Just as Carrie Fisher made a huge impression in her breakout role as Princess Leia, Debbie Reynolds has been most notably linked with one of her earliest onscreen moments. Back in the 1950s, Reynolds took the part of Kathy Selden opposite huge star Gene Kelly despite having no experience as a dancer. It’s a testament to her skill and determination that Reynolds more than held her own against the more experienced cast members. Singin’ in the Rain sums up everything you need to know about Debbie Reynolds. She didn’t let her inexperience stop her, she didn’t shy away when her co-star, Kelly, reacted badly to her casting, and her natural charisma ensured that she stole every scene she was in. I couldn’t think of any better way to remember the great actress than watching her in this breakthrough performance.

Way back in 2011 I review the Oscar winning film The Artist and I, like everyone else on the planet, couldn’t help but compare it to Singin’ in the Rain. The two films had a great deal in common as they both dealt with the difficult transition from silent movies to talkies in Hollywood in the 1920s. The two films have even more in common because of how goddamn adorable and charming they both are. However, I always felt that The Artist was just retelling Singin’ in the Rain‘s plot with a dog instead of the songs. Let’s be honest, the earlier film is one of those classics that you just can’t beat. It’s stood the test of time and is still one of the most popular musicals of all time. That is thanks in no small part to the success of it’s new star, Debbie Reynolds. As much as I loved The Artist, I can’t say that I’ve watched it since. Whereas I’ve lost count of the amount of times I’ve seen Singin’ in the Rain. There’s no greater joy than sitting and watching Gene Kelly and co. merrily dancing and singing around the screen.

It’s one of the jolliest films concerning the world of Hollywood that I can remember. Especially when you consider the fact that the plot comes about as two fading stars face becoming redundant as Hollywood modernises around them. Yes, the film simplifies the transition from silent films to talkies but it is grounded in reality. The problems of making films with sound were all based on real life events and there were recorded moments of audiences laughing upon hearing actors’ voices. It’s all played off for humour here in the 1950s but in the 20s and 30s there was a massive impact on movie making and the big name stars of the day.

Stars like Gene Kelly’s Don Lockwood and Jean Hagen’s Lina Lamont who had found immense fame as silent movie stars but found their usual act didn’t quite work when you turned the sound on. After his film studio demands that Don’s latest film be made using sound, the pair face certain ruin thanks to their own performances and the many trials of filmmaking. Lockwood’s hammy performance may be necessary to get his point across without words but it looks ridiculous when accompanied by words. But that is nothing when compared to pin-up Lina’s grating vocal performance and thick accent. Their film, The Duelling Cavalier, has a disastrous first screening so, with the help of his friend Cosmo Brown (Donald O’Conner) and love-interest Kathy Selden (Debbie Reynolds), Don decides to turn the ill-fated film into a musical. The only problem is, what to do about Lina’s voice?

As I’m writing this I’m listening to the soundtrack in the background and just hearing the music is filling me with such an insane amount of joy. There is so much brilliance within this film. The performances are incredible, the musical numbers are astounding, Gene Kelly’s choreography is perfect, and the story is highly entertaining. It hasn’t aged in any way and still feels as fresh today as it did the first time I saw it. Singin’ in the Rain may be, at it’s heart, a love story but its greatest feat lies in the portrayal of a difficult time in Hollywood. It is accurate but doesn’t lose any charm or energy thanks to the bleak situation. Debbie Reynolds steals every scene she’s in and it’s easy to see why so many people fell in love with her after this film. As much as the actress should be remember for her huge body of work, I don’t think it’s any great shame if you predominantly praise her for this film. It’s perfect.