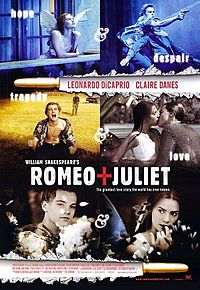 There are a couple of reasons why a lot of the girls I know around my age are obsessed with Leonardo DiCaprio. Those two reasons are: Titanic and Romeo and Juliet. These films really pushed DiCaprio into spotlight as the romantic hero and the pin-up of the late 90s. We all remember his curtained blonde hair, beautiful blue eyes, and youthful grin from our youth and still sigh at his perfection. Even now, 20 years later, DiCaprio is perfect but, I’m happy to say, his hair has improved somewhat. When I was at university I was part of a group of literature students who fondly remembered Baz Luhrmann’s adaptation of the tale of two star-crossed lovers as being their first memorable experience with Shakespeare. It took the words of the Bard and made them cool and sexy. And it cemented DiCaprio as our ideal man. Now that I’m a partially matured adult, I find I appreciate about Shakespeare in a more traditional manner but in my younger days the idea of Shakespeare with guns was too good to ignore. Now that the film has celebrated the 20th anniversary of its release, it felt like the perfect time to revisit this classic.

The second that Baz Luhrmann’s big screen adaptation of Romeo and Juliet opens the audience may be confused about what they’re watching. The opening of the film could easily be mistaken for an episode of Cops or something. This isn’t the fair Verona that we’re used to but a Verona Beach deep in the middle of gang warfare. The names of Montague and Capulet adorn the sides of huge buildings that sit side by side and the streets are full of gunfire. Yes, we have no romantic heroes wielding their rapier’s here but driving muscle cars and firing bullets at anyone who looks at them funny. This wasn’t the first time that Shakespeare had been modernised by Hollywood but it was one of the biggest and loudest.

Thanks to the direction of Baz Luhrmann who, as we all know by now, likes to make a fucking huge spectacle. It’s the reason I wasn’t a massive fan of The Great Gatsby but is something that kind of worked for him here. It’s no wonder that Luhrmann would be the one to give this play the Hollywood treatment. I mean he’d be jizzing all over the idea of teenagers dying because their love was so strong. Lurhmann is so annoyingly steadfast in his belief that love is all you need that the film becomes more sincere that I believe it needs to be. But, as we established in Tuesday’s review, I’m massively cynical.

However, I guess in order to make this film popular then you have to push the idea that these two randy teenagers are actually madly and deeply in love. And he manages that. Well he manages that with a huge amount of help from the two lead actors. Leonardo DiCaprio and Claire Danes were both young actors who found their start in television roles. On screen they manage to deliver Shakespeare’s prose with much more understanding and sophistication than the more recent film. The pair have great chemistry and manage to carry the story beautifully.

Although, this play isn’t just about the main characters and the supporting cast all do pretty good work. Although, the pick of the bunch are certainly Harold Perrineau as Mercutio and Pete Postlethwaite as Friar Laurence. These two elevate the film to a higher standard and bring a new dimension to these well-known characters. I have to say that, watching this again as I near 30, I find the film a bit too gimmicky and over-played for my liking. What was refreshing and edgy in the 90s now just feels like too much of a relic. This was Shakespeare for the MTV age but, if I’m being honest, it feels different in the time of social media.

Although, what Luhrmann has managed to do within all of the spectacle and hype is keep the story that is at the heart of this play. The story of Romeo and Juliet will only succeed because of one thing: the two leads. Thankfully, the two talents at the heart of this adaptation are shrewd and talented enough to understand what they’re trying to achieve. Despite all of the distractions and jump cuts, we still focus on the love that is at the heart of the film. Within all of the chaos and the nonsense, we still have the poetry and majesty of Shakespeare’s words. And, frankly, that’s what matters. That’s what makes this film as watchable today as it was 20 years ago.