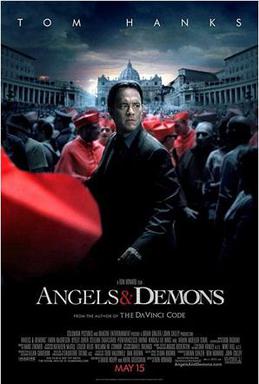 It seems that I’m going through a bit of a Tom Hanks week this week. I can’t get away from the man. This week Michael Moore declared that he run for president in 2020; my Tuesday Review this week was his latest Robert Langdon film Inferno; and today my colleague told me she preferred younger Tom Hanks to younger Harrison Ford. Now, I’m not trying to criticise the man but there is no competition. Tom Hanks is Hollywood’s Mr Nice Guy but he’s hardly a fucking pin-up. Anyway, I decided to continue this trend by discussing another of the Dan Brown film trilogy. But which one to pick? A few weeks ago the Cinema Sins YouTube channel brought out a video describing everything that’s wrong with Angels and Demons and, weirdly, it made me want to watch it again. I’ve seen The Da Vinci Code a couple of times and it bored the shit out of me every times. As you may remember from Tuesday, Inferno hardly set my spirits alight so, by process of elimination, Angels and Demons had to be my favourite of the Robert Langdon trilogy. Although this probably has something to do with my love of Ewan McGregor and Stellan Skarsgård because you can hardly say that I love the film or the book. Still, I’m never one to ignore a craving so I spent last night reminding myself of what a travesty it really is.

Angels and Demons was the novel that introduced the world to Professor Robert Langdon but it was the second film to be released. Probably because it’s successor, The Da Vinci Code, had the greater social impact thanks to its subject matter. The Da Vinci Code was a slow moving and crazy thriller that hardly wowed critics so Angels and Demons needed to up its game. To be fair to Ron Howard, it did. However, adding more action is hardly akin to making improvements. As one reviewer pointed out, the first film consisted of Tom Hanks standing near paintings and explaining the plot whereas the second has Tom Hanks explaining the plot whilst running… because action. Still, at least it wasn’t boring. There is enough action, violence and explosions to ensure people stay awake. It does mean that, whatever meandering nonsense is also happening on screen, there is always something to engage with. Even if you ignore all of the other mcguffin, this film comes to down to the classic race against time to save innocent people from a killer.

However, for the purposes of this review, we can’t ignore all the other stuff. Angels and Demons may be a fairly decent action film but it shrouds itself in the same historical and religious mystery that The Da Vinci Code did. It’s still a completely nonsensical and sensationalist film that makes up for a lack of substance with nonsense and conspiracy theories. It plays on a base level and is far too occupied with creating drama than following logic. When Robert Langdon is asked to come to Venice he is faced with the task of tracking down the long hidden Path of Illumination that will lead him to a secret Illuminati lair. Along the way he must prevent the murder of the four Cardinals who are favourites to be elected as the new Pope and stop a vial of antimatter destroying Vatican City at midnight. You see?! It’s fucking insane.

Dan Brown is apparently incapable of writing a simple thriller which, if the recent spate of psychological thrillers to be released is anything to go by, apparently any idiot can put together. No, his head is too far up his own arse for him to realise that exploring religious history and creating intricate puzzles involving art isn’t adding anything to the whole story. It’s another of those stories that is fine if you just ignore everything about it but once you start to really think about it nothing makes sense. There are so many silly and implausible events in this film. It’s really irritating. People’s behaviour doesn’t make sense and there are so many moments where plans would have failed if people had acted naturally. It’s all so fucking convenient because, if this were real, it would be impossible.

The Dan Brown rule of thrillers clearly isn’t “simple is best”. He throws everything he has at it and leaves poor people like Ron Howard with nowhere to go when adapting it. Angels and Demons is nothing more than a cheap thriller that is elevated with its own pompous obsession with the Church and the secrets its hiding. To say it’s the best of the three films is like saying the imperius curse is the best of the Unforgivable Curses. Yes, its not quite as bad as straight up killing anyone but you wouldn’t recommend it to people. I just hope that the whole Dan Brown thing has come to an end now. He’s a low-rate writer that gained momentum because he pissed off Christians around the world. We gave him publicity and these shitty films are the price we all have to pay. Well done us.