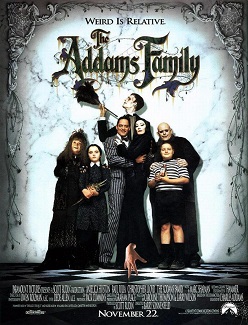 When I was younger our local village shop started renting out films on VHS. Yes, that does probably age me horribly but I lived through a golden age of video tapes, cassettes and floppy disks and I’m not about to hide that. Anyway, there were a couple of films available that I became obsessed with and always tried to get my father to rent for us. It drove my twin sister a bit mad because she got bored with them but I really didn’t give a shit. One of them was Addams Family Values. I fucking loved that film. It was everything to my pre-teen self. I’m pretty sure it’s the reason I love Joan Cusack so bloody much. Which makes it weirder that I don’t think I saw its predecessor until quite a few years later. I don’t know how I managed it but I somehow avoided the 1991 Addams Family film. Thankfully I’ve seen it more than enough times to make up for it now. And, as I never actually got round to creating that list of alternative Halloween films that I promised you, I decided I would discuss it here for my post-Halloween TBT. After all, along with last Thursday’s Hocus Pocus, it definitely would have made the list.

The Addams Family were first introduced in 1938 thanks to the cartoons of Charles Addams. There have been many incarnations of the weird aristocratic family with a love of the macabre but their introduction on the big screen didn’t come until 1991. Although, if I’m being honest, the film and its sequel are the only real knowledge I have of the family and, as such, it’s difficult for me not to see them as the dominant adaptation. I’m sure others would disagree but there’s fuck all I can do about it now. It just means that Anjelica Huston, Raúl Juliá, and Christopher Lloyd are the people I think about when someone mentions the Addams family to me.

We are first introduced to the new version through a storyline involving Uncle Fester’s (Christopher Lloyd) return to the family after disappearing in the Bermuda triangle 25 years earlier. He and his brother, Gomez (Raúl Juliá), fell out years later meaning Gomez has spent their time apart blaming himself for Fester’s disappearance. It’s safe to say the family are overjoyed to find their missing relative again and quickly try and help him recover from his amnesia. However, his young neice, Wednesday (Christina Ricci) and sister-in-law Morticia (Anjelica Huston) quickly begin to suspect that all is not what it seems. After all, Fester is actually just the disguised son of a greedy woman who has united with the Addams’ lawyer to steal their secret fortune.

As narratives go it’s hardly the most inpsiring and it tends to bungle around for a while before getting to the rather obvious and fairly cheap conclusion. It never really pushes itself too far and, instead of developing characters or concepts, puts too much empahsis on visual gags and family-friendly scares. Still, the whole film is fun and the tensions that exist between the Addams family and the real world create a fair amount of humour. There are more than a few great one-liners and the visual gags really are quite spectacular at times. I mean take the scene in which Wednesday and her brother Pugsley (Jimmy Workman) tackle the fight scene near the end of Hamlet. It created an iconic scene of bloody hilarity.

Still, it feels as though their world is never really explored as much as it should have been. It’s all rather tame. The narrative is rather flimsy and the script doesn’t really tie together. There are too many loose ends to tie up and the ones that are attempted are carried out clumsily. It’s all very awkward and should be better considering how great the casting is. I know I’ve already said that I’m biased but the family are all played wonderfully by their respective actors. Ajelica Huston was rightly nominated for a Golden Globe for her portrayal of Morticia and Christopher Lloyd and Raúl Juliá are both equally fun as Fester and Gomez. This film had such great potential but it wasn’t until the follow-up that the characters and their world were really able to get going. Still, it’s worth a watch every now and then. Especially at this time of year.