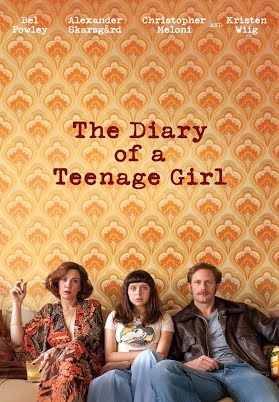 When The Diary of a Teenage Girl came out last year I was desperate to see it. Of course, I didn’t see it at the time and it has been calling to me every time I opened Netflix recently. The graphic novel has been in my Amazon basket for months as well. It’s exactly the kind of thing I was bound to get obsessed with. You know the score by now: feminism and shit. Although, upon its release it caused something of a controversy as all the best things do. The critics loved it but the 18 rating was a fairly controversial topic in the UK. The film was given a high rating for its sexual content. However, as a film about a teenage girl coming to terms with her own sexuality, it meant nobody that this story was relevant to would have seen it at the cinema. Even the film’s star Bel Powley came out to urge teenagers to sneak into the film to embrace its message. I mean, really, it’s a fair point. Yes, there’s a lot of dark and adult themes running through the film but, it’s not more sexually suggestive than many of the films out there with a lower rated. I realise that we live in a world where we try and protect people from certain things but it always seemed fucked up that people were trying to keep this film from the people who it was made for. Still, that doesn’t matter now it’s been out for so long. Anyone can see it now and, without wanting to spoil anything, they all should.

The Diary of a Teenage Girl is set in the 1970s and is the story of 15 year old Minnie Goetz (Bel Powley) as she starts to explore her sexuality. The object of her misguided affections is her bohemian mother’s (Kristen Wiig) 35 year old boyfriend, Monroe, (Alexander Skarsgård). Minnie makes the choice to loser her virginity to Monroe. Minnie is desperate for affection and love so quickly falls into a torrid and emotionally unstable relationship. She further descends into a world of drugs, alcohol and sex to come to help her understand who she is becoming. It’s a difficult, dark and real portrayal of what it is to be teenage girl. I mean it’s not exactly everyone’s story but it gets to the heart of teenage identity and female sexuality that has often been hidden in films like this. We’re used to representing young men accepting their role as Lothario but women are still being encouraged to keep their virtue. It’s about time we had a healthy view of growing up as a girl.

It makes for uncomfortable viewing at times thanks to the morally questionably major relationship. It’s not always easy to watch as Minnie falls deeper into a spiral of destructive behaviour. However, the film is still incredibly watchable and enjoyable. Deep down there lies plenty of love and comfort beneath the addictive behaviour and toxic relationships. It is still a funny and unashamedly bawdy story but it so well made that it works remarkably well. First time director Marielle Heller understands the message at the heart of Minnie’s story and she knows how to work with it. Acting as writer as well, she has managed to forge a great and multi-layered script out of Phoebe Gloeckner’s graphic novel.

Although, really, this film is made on the performances and the main trio are all equally fantastic. Alexander Skarsgård never overplays his position of an adult man entering into a sexual relationship with a teenage girl. Equally, Kristen Wiig is strong as Minnie’s mother who has left a stable marriage to a scientist in favour of a life of drugs, alcohol and relationships with dodgy men. She laments her lost youth and is increasingly jealous of her blossoming daughter. She can’t make her mind up between showing Minnie affection or being hard and cold. In Charlotte we see the problems that come from growing up believing you are nothing better than your looks and the man you’re with. Wiig is astonishing in her role. But it is Bel Powley who is standout and is breakthaking in the role of Minnie. She is funny, confused and scared. It’s a great performance that, even within the context of a drug-influenced lifestyle, is recognisable for anyone who grew up as a female.

The Diary of a Teenage Girl is the kind of film we need to embrace for he sheer fact that is presents a side of female identity that is often hidden away. It manages to do it in an incredibly sensitive way and without placing any judgement on its main character. Bel makes mistakes but it is never her undoing. She likes sex but never finds herself becoming the social outcast because of it. The film doesn’t end with her fall from grace but with her confidently accepting her sense of self. She learns a lot about who she is and who she can be. It’s empowering and I am really fucking sad it wasn’t made when I was still in my teens. Any teenage girls out there who haven’t see it, see it as soon as you can.