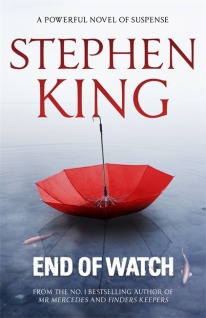 I know it’s getting to be a habit that I start every post by telling you I intended to write about another topic but I genuinely had plans to write about something else today. After finally watching Suicide Squad last week I had decided it was time to watch Batman vs Superman. I meant to watch it this weekend. I even tracked down a copy. It was the fucking ultimate edition and everything. With over 30 extra minutes of Zack Synder nonsense! However, when it came down to it, the idea of a whopping 3 hours of shit like The Man of Steel but with added Batfleck and Khal Drogo just didn’t appeal. So, in celebration of finally finishing this book after weeks of trying, I decided to give you my thoughts on the final part of Stephen King’s Bill Hodges trilogy. Mainly because I can’t find one person on the internet who doesn’t absolutely fucking love it. And, more mysteriously if you ask me, nobody is bemoaning the use of present tense which is still super annoying to read in. It utterly mystifies me. I mean, did King actually write these as film scripts but decide it was better to get them as novels first? It sounds so childish. Like the kind of shit you’d write in primary school but with actual punctuation and symbolism and shit.

You know that feeling when you don’t really enjoy a book that apparently everyone else really fucking loved? I don’t know about you but I start to think I’m missing something. I feel like a fucking idiot for not seeing what everyone else saw. So, you can imagine how I felt upon finishing End of Watch recently to find I disagreed with every great thing that had been said about it. Had I even read the same book as everyone else? Or is it just that Stephen King is such an icon these days that he can no wrong? If you’ve read my blog over the past few years then you’ll be aware that my relationship with King’s works has been somewhat turbulent of late. None of his recent stuff has really been “my thing” and I’ve found him to be more of a cliche than the trendsetter he may once have been. I mean he’s been around for a long time, people get into habits that are too tricky to break. Look at Marvel film’s weird obsession with things falling from the sky in their final acts. Stephen King is a great writer, there can be no doubt about it, but there is very little about his latest books that really showcase that.

So what is End of Watch? Well, it’s the third book in the series following retired detective Bill Hodges and his investigation company. He is still joined by his young friend Jerome and his partner Holly Gibney. They have been inexplicably helping Hodges since Mr Mercedes and are more than keen to follow the 70-year-old ex-detective as he once again follows the deranged Mercedes Killer, Brady Hartsfield. Something that is most odd considering at the end of the first novel Brady was dealt with quite expertly after Holly bashed his head in.  Still, that doesn’t have to mean that King can’t bring him back and this time, for very flimsy and mostly unexplained reasons, Brady returns with the added power of telekinesis and mind control. So, despite being mostly incapacitated, he is still able to fuck shit up and finish what he started in his previous encounter with the Hodges gang.

Although, Brady isn’t the worst thing that Bill is fighting in this novel as we find out that he is also in the late stages of pancreatic cancer. The odds aren’t great and he’s in constant pain but, keen to finish the job, Bill puts off treatment until he stops Brady once and for all. Something that is not helped by the fact that, obviously, nobody fucking believes him. When victims of Brady’s first crime, the City Centre Massacre, start committing suicide everybody is ready to believe that they simply couldn’t go on anymore. It’s when more suicides are reported with similar factors that Hodges starts to sense something is up. Within about two seconds of learning about the first suicide, Hodges suspects Brady even though there is no fucking evidence and it feels like the whole thing is solved in about two seconds.

Now I’m trying to write this in a way that doesn’t make it sound insane but it’s difficult. This story isn’t all that weird in the grand tradition of Stephen King novels but it is in terms of this trilogy. I mean the psychic powers and paranormal stuff just came out of nowhere at the end of book 2 and it just feels silly next to everything else. I know I’ve not been a fan of the books so far but I always praised how hauntingly realistic their antagonists were. Brady wasn’t exactly keeping me up at night but he represents a kind of fucked-up individual that does exist. Until this book. Then he just became a stock horror villain. I just didn’t give a shit. Plus, it is inconceivable that Bill Hodges had enough intuition to realise that the paralysed Brady was behind all of the awful stuff that’s going on. Everything in this book is a massive stretch that I just couldn’t get behind.

Although, this isn’t a terrible story and is probably the part of the trilogy I enjoyed the most. King is on firmer ground when it comes to the paranormal and, unlike last time we saw him, Brady is something to worry about. His new-found skills have no place here but, as a stand-alone novel, he makes quite the antagonist for the over-the-hill detective. Especially when he happens to be fighting an aggressive form of cancer. Hodges is a great character who sits well within that gumshoe tradition of a gruff yet well-intentioned detective who just wants to get the bad guy. No matter what the costs. Seeing the man in a much more vulnerable state and with nothing left to lose only made this book all the more engaging. Unlike his assistants who fail to make much of an impression and are nothing more than awful racial stereotypes or rage-inducing depictions of mental illness.

I think one of the main reasons that End of Watch and its predecessors have done so well is that they’re readable. I can see how easy they would be to get lost in of you’re a less cynical person than I am. The story drives you on and there are so many twists and turns that I can understand how people who like this genre would lap it up. The perspective is constantly changing and the narrative follows the path that you expect it to. There are investigations, missed clues, red herrings and a final chase in a snowy forest to amp up the intensity. They’re the kind of things that would make for dramatic television adaptations or something. However, just because they are easy reads doesn’t make them great. King has a way with words, that can’t be denied, but that shouldn’t overshadow the fact that a lot of this novel is kind of silly and nonsensical. The dialogue is mostly cringey and the ending is so fucking sentimental that it almost makes JK Rowling’s epilogue look aloof.

So many books. So little time.
Probably my favourite read this month.
Okay, I didn't JUST finish reading it but I never actually posted a review of this one. Not as good as I was hoping for.
BOOK REVIEW: Celestial Navigation by Anne Tyler
BOOK REVIEW: Nightmares & Daydreams by Dominic Anton
I loved reading this again. I'd definitely recommend this beauty. Thank you @violetvenomx
There aren't many books that have made me feel this angry. The twist is so painfully obvious.
When you find a second-hand copy of a different edition despite having an already full shelf.
So glad I finally read this one.