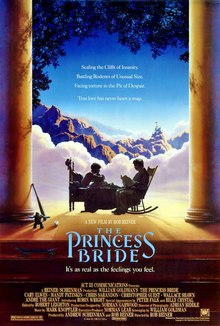 This week I bought something that I have wanted to own for a fucking age but didn’t let myself get. In finally embraced my love of The Princess Bride and bought my very own “Hello, my name is Inigo Montoya” t-shirt. I don’t even have it yet but it’s already one of the greatest things I’ve ever owned. I think I was inspired by the title of my Tuesday review because it’s the only thing that comes into my head whenever I see those bloody “Hello, my name is” stickers. Consequently, I’ve also spent the last few days starting imaginary duels with anyone who crossed my this week. “You ate the last biscuit, prepare to die.” “You’re walking too slowly, prepare to die.” “You cut in front of my in a queue, prepare to die.” That kind of thing. So I absolutely had to watch Rob Reiner’s film adaptation to try and get over my current obsession. Plus, my impression of Inigo could do with some work.

The Princess Bride wasn’t terribly successful on first release but found cult status once it was released on VHS. It’s exactly the kind of film you want to curl up and watch when you’re stuck in bed with flu. Probably because the story begins with a grandfather (Peter Falk) reading his sick grandson a bedtime story. It is the love story of Buttercup (Robin Wright) and farm boy Westley (Carey Elwes) but, don’t worry, it’s not one of those kissing stories.

The Princess Bride takes the conventional fairy tale romance and has some fun with it. Much in the same way he did for This Is Spinal Tap, Reiner really embraces the genre before amping things up as much as he can. It’s a clever and very successful approach that will have children and adults alike entertained. It features swashbuckling strangers, a Spaniard out for revenge, a 6-fingered man, a friendly giant and inconceivable situations. The Princess Bride is exciting, funny and self-aware enough to know what it’s doing.

When Westley goes off to make his fortune his ship is captured by the Dread Pirate Roberts and he is presumed dead. Years later, Buttercup is set to marry Prince Humperdinck (Chris Sarandon) until she is kidnapped by a trio of rogues. Their leader, the Sicilian Vizzini (Wallace Shawn) is being paid to start a war between the Prince’s nation and their neighbouring kingdom. He is aided by Inigo Montoya (Mandy Patinkin) and gentle giant Fezzik (Andre the Giant). Unfortunately, they are being pursued by the Man in Black who appears to be after Buttercup for his own reasons.

Rob Reiner directs with his tongue constantly in his cheek and William Goldman’s script satirises the world of fairly tales and storytelling. It takes every silly conceit of the stories you were told in your youth and turns it up to 11. It is a world full of silly names, silly dialogue and silly people. However, underneath that runs some decidedly unfunny themes: namely true love, family, honour, suffering and friendship. It always manages to find the perfect mix between serious and comedy and carries it all off with a huge dose of charm and heart.

The Princess Bride is much cleverer than it appears and has fun making itself appear to be a lesser film. The cast play their parts beautifully and manage to be both playful and take the whole thing seriously. The story, littered with gags a-plenty, is played fairly straight but the film fights against realism. The sets are all dodgy, the stunt doubles all obvious, and the continuity is all over the place. It looks like a shoddily made film but it doesn’t matter. The film is fantasy that you are willing to follow. The Princess Bride may not be the greatest film you’ll ever see but it’s inconceivable that you won’t enjoy it. If anyone asks you if you want to watch it you need only answer “As you wish”.