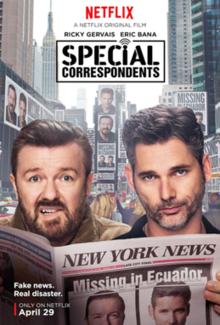 I’ve recently started watching Extras again on Netflix and have been loving the reminder of how amazingly funny Ricky Gervais is. The Office was a game changer in terms of British comedy and the first series of Derek was amazing despite the drama in the press. Gervais is a great comedic talent when he’s using his skills in the right context. The Office and Extras were the same kind of cutting, I don’t give a shit who I offend attitude that got him in trouble with The Golden Globes. It’s not the same attitude he used when writing The Invention of Lying. When Gervais forces himself to so conventional Hollywood then it doesn’t work. It lacks bite and originality. So I wasn’t exactly looking forward to his Netflix original film and probably would have missed it. Until he went all fucking pompous about it and announced how good it was because he was doing it all himself. Now if you make those kind of claims then you have no where to hide.

Ricky Gervais, according to himself, knows what’s funny. It’s making something on your own and not by committee, apparently. I get where he’s coming from but, after watching Special Correspondents, I really wish he’d had at least one person with him. Instead, Gervais has taken on the role of actor, writer and director for his Netflix remake of the French film Envoyés Très Spéciaux. Well I guess that could be the reason that Special Correspondents doesn’t quite work as you want it to. I mean maybe all of the jokes, subtle dialogue and original narrative got lost in translation somewhere?

The film follows radio journalist and minor celebrity Frank Bonneville (Eric Bana) and his geeky sound engineer Ian Finch (Gervais) as they are tasked with covering a possible uprising in Ecuador. Thanks to a mix-up of envelopes, the hapless Ian throws away the tickets and passports so the pair are unable to leave the US. Rather than face their boss the pair hide away above a local restaurant and proceed to phone in nightly reports. Realising that they have to up their game to keep the public interested in their radio station, Frank starts to make up increasingly outrageous and exciting stories about the escalating violence and political intrigue.

When the pair release a fake story that has massive political implications they are told to get to the American Embassy asap. Of course they can’t so Frank and Ian set-up a fake kidnapping to buy them some time. They are turned into overnight sensations and Ian’s awful wife, Eleanor (Vera Farmiga) takes every opportunity to throw herself into the spotlight. She releases a charity single to raise ransom funds and gives out interviews to anyone who asks. Never once mentioning that before Ian left the couple were separated after Eleanor slept with Frank.

There was a lot of potential within Special Correspondents to take a satirical look at the world of modern journalism. The idea of false news reports and reporters not being where they are supposed to be is a potentially huge and very real issue. Gervais chooses to ignore these chances and, instead, goes down an increasingly farcical route. Everything is so over-the-top and handled so clumsily. The story never feels as if it’s taking place in a real world inhabited by real people. Any potential critique we could have seen has been lost in favour of a stupid fake-kidnapping plot. From there the narrative struggles along to find an ending that is satisfactory only in the sense that it means the whole sorry affair is over.

Hands down, Special Correspondents doesn’t work because it just isn’t funny or clever enough to do what it set out to. There is a noticeable lack of jokes and the ones that do sneak into the script are woefully underplayed or dealt with so badly. There is no real chemistry between Eric Bana and Ricky Gervais so their blokey banter never lands where it should either. There is no bromance here. It’s all just dull. Which would be fine if there was enough finesse to make this a different film. The story is an unoriginal hodgepodge of ideas we’ve seen a thousand times before, the characters have no development and the Gervais’ direction is dismal. He has no concept of pacing and, for someone who is regarded as being so funny, he has no idea how to make a fucking joke land.

There is no subtlety at work here and Gervais turns to dialogue to ensure the audience feels what he wants them to feel. Every sentence uttered by one of the characters is intended to tell you everything you need to know and not have to waste time forming your own opinions. It’s just the same old Hollywood guff that, had you not know of Gervais’ input, could have been written by anyone. Rather than the unique and interesting character studies of his early television work, we are faced with stock characters going on the usual journey of emotional growth. It’s all just paint-by-numbers stuff. Even the romance is shoehorned in and dire. It’s an insult to Tim and Dawn that Ian and colleauge Claire Maddox (Kelly MacDonald) are allowed to get their happy ever after because they certainly don’t deserve it.

Special Correspondents goes to prove what we’ve all know for a while: Gervais just isn’t suited for Hollywood. He needs the intimate television experience to get to grips with his characters. He works best in shorter formats with much less scope. He got lost in the excitement and vastness that this project offered him and it’s fallen flat. Of course, we also know this won’t matter to him and the criticism will wash over him. I expect more of this shit to come to Netflix in the coming years.