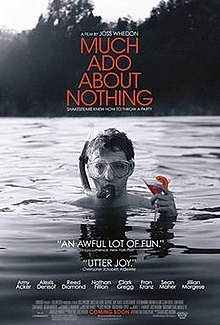 So this week is all about Shakespeare and I’m still on a bit of a fan high. After reviewing Macbeth on Tuesday I wanted to follow it up with another great adaptation of one of his plays. My first instinct was to turn to one of the greatest adaptations of one of his greatest plays. I’m talking about The Lion King, of course. But we all know that right. Nobody’s gonna care what this dickhead thinks about one of the greatest Disney films of all time. I’d also have spent the entire time talking about how much I love it rather than doing anything useful. To acknowledge the anniversary of his death last year, I made a list of my favourite Shakespeare adaptations for people who don’t like Shakespeare. I remember really wanting to write a top 10 list of my favourite adaptations but couldn’t decide on anything other than the top 2. The first being the BBCs epic The Hollow Crown. The second is one probably my favourite straight Shakespeare adaptations of all time. So, in honour of the 400th anniversary, that seems like a great place to start. As it is also the play that inspired the name of this blog it seems like fucking fate has handed us a great opportunity.

Back in 2012, right after he’d finished filming The Avengers. director Joss Whedon gathered some friends at his house and filmed an adaptation of Much Ado About Nothing. Whedon and his friends had always gathered at his house for Shakespeare readings but it wasn’t until his “break” between filming and post-production of his Marvel blockbuster that their pastime became a full-length film. The story is transported to a modern time and the characters walk around his California home wearing suits and pretty dresses. It’s not the most comfortable setting for a comedy set at the end of a massive war but Whedon makes it work for him.

The whole film is beautifully shot around his home and presented in black and white. Normally, I’d be ready to moan about this as an unnecessary ploy to stand out but it actually adds to the charm of Much Ado. It makes the modern setting feel less modern so it almost makes it easier to accept the weird scenarios that take place on screen. Rather than being for pure aesthetic value, it helps to tie together the contemporary setting with the archaic language. It also works with the classic feel that the comedy has. It’s all sort of slapstick and screw-ball in the grand tradition of black and white Hollywood. It’s an absolute breath of fresh air.

Which is good considering the play has a dark streak to it. In the midst of the romantic entanglements there is lots of plotting and the attempt to besmirch an innocent young woman’s virtue. This is a seemingly harmless play that, towards the end, really packs a punch. Newly returned from war, Don Pedro, Claudio and Benedick, stop off at the home of Leonato to celebrate their victory. Claudio has fallen in love with Leonato’s daughter Hero and, with Don Pedro’s help, their engagement is arranged. At the same time, Hero’s cousin Beatrice has sworn off love and given up all thoughts of marriage. She enjoys exchanging witty banter with the self-proclaimed bachelor Benedick, who in Whedon’s modern version she has a romantic history with. The gathered company decide the only solution is to bring the pair together.

Whilst this merriment is taking place, Don John, Don Pedro’s bastard brother, is working hard to destroy the happiness that surrounds him. He hopes to tear apart the close friendship between his brother and Claudio by making the young love believe Don Pedro has a desire for Hero too. It culminates with the rumour that Hero was unfaithful the night before the wedding. She is cast out by her father and fiancée and talk of death and murder is heard around Leonato’s home. Of course, being a comedy  it is no surprise that the plot is eventually revealed and the couple magically overcome the previous events.

Whedon stays incredibly faithful to the script which could have made it difficult for him. However, it all works incredibly well. The few changes that he has made to the play all work for the better. The gender switch of Conrade is particularly well executed and the updated Dogberry and Verges are funnier than I think they’ve ever been. The cast and their director all have a great understanding of the lines they are speaking and embrace the wit that underlies much of the language. Sex is always simmering away below the surface and, for his adaptation, Whedon isn’t afraid to bring it into the forefront. It’s handled delicately and works brilliantly.

Thanks to the amazing cast that Whedon managed to bring together. A cast that is mostly made up of actors he has worked with before for his work for television and film. Even more recent collaborator, Clark Gregg, who had only met Whedon for the first time on The Avengers was given a role when Anthony Head was unavailable. However, the people that steal the show are, quite rightly, Beatrice and Benedick themselves. Played by Amy Acker and Alexis Denisof, the pair just light up the screen and offer a great deal of comedy. Both actors excel at the physical comedy that their role demands whilst also being able to keep up with the incredible word place that fills Shakespeare’s play. Watching the pair battle it out is mesmerising. Being able to see the love and desire hidden behind their anger is fantastic and their blindness to it is utterly captivating.

As a pay, Much Ado About Nothing, is full of the same old random shit that Shakespeare is famous for. There is plenty of unnecessary masks, evil plotting, fake deaths and crazy reveals to make any audience feel slightly wary of the sanity of any of the characters. It’s bizarre but there is something charming about the story. Considering Claudio and Hero are the main love story, it is always Beatrice and Benedick that come out on top. There’s is the most realistic and charming love story in any of the Bard’s plays. Something that Whedon and his cast understand more than anything. This adaptation is beautiful, funny and oozing with charm. I could never tire of it.