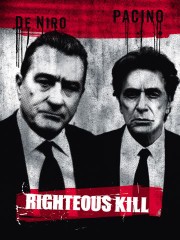 There was no part of my that was at all interested in watching Righteous Kills but my friend at university had been in London whilst the premier took place. She came back with blurry snaps of Fiddy Cent and Al Pacino telling me how much she wanted to see it. For some reason I agreed. Just like Forsaken had more attention than it perhaps deserved because it brought together two great actors, Righteous Kill was talked about because two acting greats would finally share screen time together. Yes, 2008 was the year that finally saw Robert DeNiro acting alongside the rapper Fiddy Cent. Oh and some shit about him finally sharing some real screen time with Al Pacino since they briefly crossed paths in Heat. It was supposed to be the greatest film event of all time. I mean these two could read a bus timetable and make it seem like the best thing you’ve ever heard. So how could Pacino and DeNiro working together not equal success and quality?

In Righteous Kill Robert DeNiro and Al Pacino play partners, Turk and Rooster, in the police force. Both are Detectives with many years experience who have both grown tired of watching guilty men get away with their crimes. When criminals start turning up having been shot by the mysterious Poetry Boy killer they both have to wonder how much of a problem it really is. Until a couple of younger cops (John Leguizamo and Donnie Wahlberg) start to suspect that Turk (DeNiro) is guilty of the crimes. Will Rooster (Al Pacino) be able to convince them of his partner’s innocence or will he have to accept that the man he thought he knew is a cold-blooded killer?

I’m going to be straight up with you here: I hated this film the first time I saw it and I felt no better about it the second time. Righteous Kill attempts to survive based solely on the meeting of two great actors. Yes, there is some joy to be had in watching Pacino and DeNiro acting alongside each other but that soon wears off. Then you can’t help but notice that the script is exactly the kind of shitty thriller that was constantly being churned out in the 80s and 90s. It’s chock full of clichés and is just generic. It ticks a lot of crime thriller boxes but offers nothing in the way of excitement or suspense. Director Jon Avnet clearly has no idea what do with the story or his two lead actors and the plot bumbles on to its awkward twist ending.

Let’s talk about that “twist” ending for a second. Not only it is a completely fucking stupid way to end the film but it is also cheap, unoriginal and completely see through. Anyone who watches this and doesn’t instantly see what’s going to happen 100 minutes later is obviously too fucking naive to function in modern society. Every decision about this film was made in order to pull of this impressive trick but it’s just not worth it. Everything that makes even the worst crime drama palatable are sacrificed for something so utterly mindless and unnecessary. Where is the mystery and suspense? There are some questionable narrative and editing decisions that had to be made in order to pull off the world’s least surprising twist. It’s just fucking insane.

The film thinks its better than it is partly because of the aforementioned ending and the questions it hoped to raise and partly because it somehow managed to bag two of Hollywood’s greatest actors. There is a problem with that though: the two heavyweights are completely wasted. The script is so boring and badly written that the pair just become SNL parodies of themselves. For lack of any juicy material DeNiro’s classic acting face just goes insane. I’ve never seen his eyes look thinner than they do for the majority of this films run time. I’m shocked he didn’t walk into more things on set it would have been that difficult for him to see.

Righteous Kill thinks it is telling an intelligent and thought-provoking story about morality and law enforcement. Unfortunately, the story cannot sustain the weight of it’s own self-righteous belief that is has something to say that is worth listening to. It’s hard work to make it through and the film is hardly long. Righteous Kill poses less questions than it wants and is nowhere near as complex as writer Russell Gewirtz clearly hoped. The film is just disappointing in all areas. Plus, it wants to constantly remind us that Robert DeNiro is drowning in pussy. I’d somehow managed to forget the aged DeNiro sex scene but there it is. In fact, I actually think the thing that pissed me off the most about this film is the romance between DeNiro’s character and his colleague played by Carla Gugino. There is 28 year age difference between DeNiro and Gugino and Bobby was 65 when the film came out. Now no offence to dear old Bob but that’s more difficult to swallow than any aspect of the shitty narrative.