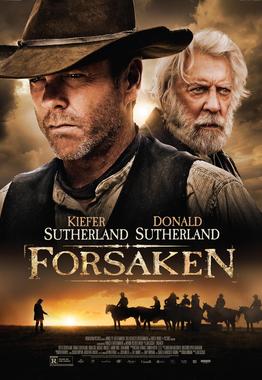 If there’s something that you should know about me going in to this review it’s that I absolutely adore Kiefer Sutherland. I think he’s a wonderful actor and devilishly handsome. I’ve loved him since I first saw his 80s films and continued to lust after him throughout every series of 24 and beyond. It’s potentially kinda creepy but there is something about his voice that just gets me every time. Even when he’s threatening to shove a towel down someone’s throat and pull it back out. So sexy. I know it’s really fucking dull to tell other people about your dreams but I once had a great one concerning Kiefer and his father, Donald Sutherland. I was dream dating Kiefer Sutherland and went to meet his family. I accidentally spilled my drink on the floor and Donald Sutherland shouted at me. I think it’s the most realistic dream I’ve ever had because if I did meet Donald Sutherland I’d definitely do something fucking stupid and he’d hate me instantly. Still, that depressing little fact isn’t going to stop me enjoying my fave father-son duo starring in a Western together. That sounds like heaven to me.

Forsaken came about when Kiefer Sutherland and Jon Cassar, who directed the actor in some episodes of 24, discussed doing a Western together. With Brad Mirman on board to write, Forsaken gave Sutherland his first chance to share screen time with his father Donald Sutherland. Despite appearing in two films together the two have never appeared face-to-face. Donald was approached by his son to play his father in 24 but he didn’t relish the chance to play a man who wants to kill both his sons. Well, when one of those sons is Kiefer Sutherland I can understand why that would be difficult. Just like the awful Righteous Kill relied heavily on the meeting of two great actors, Forsaken owes a lot to the coming together of father and son. It’s all anybody seems to be banging on about.
After all, the script isn’t really much to write home about. Sutherland Jr. plays John Henry Clayton, a civil war veteran who was so affected by his military service that he became a gun for hire once the fighting had stopped. Sutherland Snr. plays his estranged father Reverend Clayton who disdains of his son’s actions and riles against the reunion his son so craves. Upon arriving back in his home town, John Henry discovers that the people are being hounded by greedy property developer James McCurdy (Brian Cox). With the railroad coming to town, McCurdy is keen to get his hands on people’s property and isn’t above getting his hired goons to do whatever it takes to get it.John Henry seems content to keep his head down and stay on the straight and narrow until McCurdy’s boys start turning their guns on the townsfolk that won’t move away so easily.
Forsaken is a refreshing change from the recent surge of refreshingly new Westerns that have cropped up in Hollywood. This doesn’t easily stand next to the likes of Django Unchained and The Hateful Eight because it harks back to a classic time in film history. Forsaken takes its lead from the old school Westerns where evil gunslingers rode into town, caused mischief and were stopped by a reluctant hero. Really, the film is pretty pedestrian; there is nothing to excite and the plot follows a pretty obvious course. Although, on the positive side this isn’t necessarily a bad thing. There is nothing to hate about Forsaken other than its complete lack of originality. It is, after all, incredibly consistent with the classics of the genre. The film never veers off course and stays consistent in tone. Every single trope you could hope for pops its head up as if Mirman were steadily crossing them off his list.
What saves Forsaken from being a forgettable Western tragedy is the combination of the two Sutherlands. Their time together as regretful son and resentful father is just magnificent and the film could easily have stayed in the personal territory of bringing the two back together in the wake of John Henry’s mother. The two actors have a great understanding of their characters and how thick they need to lay on the brooding and emoting. The pair work well together and, obviously, their relationship adds to the on-screen experience. They are joined in their strong performances by Michael Wincott as one of McCurdy’s men and Demi Moore, yes Demi Moore, as John Henry’s lost love.
Obviously his time directing episodes of 24 has left John Cassar with the know-how to build tension and handle the action segments. Even though we all know how the story is going to turn out, you won’t be disappointed by the journey. There is enough drama to keep you pushing on through to the action packed and bullet riddled finale. Cassar also has the good sense not to drag the plot on for too long and this trip to the Wild West will only keep you hanging on for about 90 minutes. It gives enough time to get to grips with the characters but avoids the story going round in circles. Forsaken is by no means the best Western you’ll ever see but, thanks to a few good performances, it is a not completely abysmal reminder of classic Hollywood cowboys.