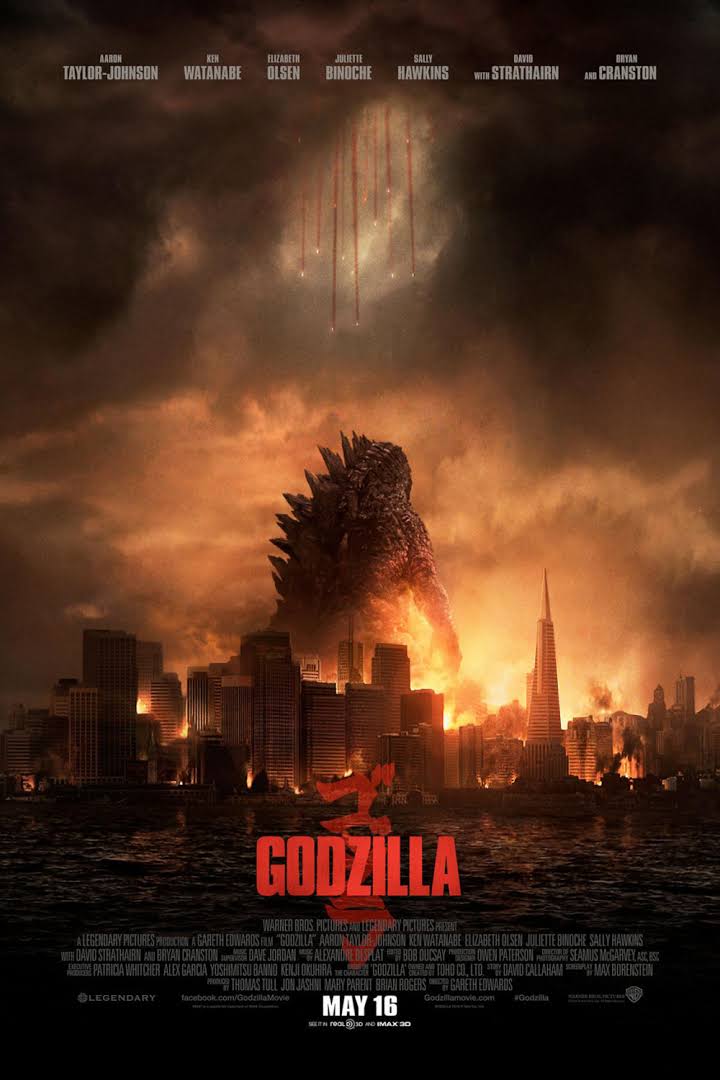 As some of you may remember, my, personal history with Godzilla hit a rocky patch when I first watched the disgusting Matthew Broderick film, as it did with many fans. So when it was announced that Monsters director Gareth Edwards was going to create a new one to be released in 2014 I couldn’t bring myself to be that excited by it. I’ve always loved classic Godzilla and will always be a little bit excited by the prospect of gigantic creatures beating the shit out of each other but I’d been hurt too badly to let this Kaiju back in my life. Until a guy I work with told me I had to and proceeded to bring his copy of the film in for me to borrow. I felt like I couldn’t really say now. So I did what I never thought I’d do. It sort of feels like taking back a cheating ex but never being able to get over the idea that he’ll cheat again.

After a short clip showing a nuclear blast and a mysterious scientific discovery, the action picks up in fictional town, Janjira, where the Nuclear Power Plant is experiencing unusual seismic activity. Engineer Joe Brody (Bryan Cranston) is worried about a potential meltdown and sends in a team to investigate the reactor. The reactor is breached and the team, including Brody’s wife, perish whilst the plant is destroyed. 15 years later Brody and his son, Ford (Aaron Taylor-Johnson) discover the breach was caused by a huge, winged creature. A creature that has now woken up and is searching for his mate. Turns out the creature was also noticed by Godzilla who is now hunting down his competition. In order to get back to his family, Ford must take part in the operation to trap and destroy the monster threat.  Whilst humanity is doing all they can to prevent the new MUTOs (Massive Unidentified Terrestrial Organism) from destroying everything in sight, the King of the Kaijus is planning his attack.

Godzilla is exactly the kind of film that we needed to get past the 90s abomination. Gareth Edwards’ epic blockbuster doesn’t feel anything like a huge blockbuster. The direction is restrained and he takes a more classical approach. Tension is built through suspense and, like Jaws put off showing the title character until late into the film. It is a world away from the 1998 film, which is something the fans and Godzilla himself really needed. We don’t actually see the titular monster in full until about an hour into the film but his presence is felt through small glimpses. It feels like both a great and a sad choice for Edwards to make. On the one hand, it is very artistic and dramatic. On the other, it limits the amount of monster fighting.

I prefer to focus on the positives and Edwards’ approach is visually stunning and does well at creating tension around it’s main feature. The scene of Godzilla’s first real reveal is just stunning: he appears into a foggy night sky before walking through an array of red Chinese lanterns. Turning to the camera he roars at the audience ensuring that his main entrance is unforgettable. It’s a really amazing scene. However, there is still a part of me that wishes Edwards had been a little less restrained and artistically minded. A part of me that wishes he’d just given us a little more Godzilla. Although, the slow reveal does at least stay faithful to the original.

Godzilla is, unlike its predecessor, heavily influenced by the original but it manages to feel fresh and exciting. The biggest influences, though, come from Steven Spielberg. This is almost like Edwards trying to make a Steven Spielberg Godzilla film and that’s not a bad thing. The film tries to show the human element behind the monster attack. Rather than trying to humanise Godzilla, like the 1998 one tried to, it brings emotional elements through the idea of absent fathers. Yes, it might not be perfectly executed but it acts as an emotional jumping off point between huge monster attacks.

Monster attacks that are, we have to admit, are the main reason we’re here. The coworker who let me borrow the film told me he wished there’d been more fighting, which is something I understand. However, there are moments within the latter half of the film that are just outstanding. Take the moment Godzilla first shows off his dragon-breath. Then take the second time. There might not be as much monster on monster action for a lot of hardcore fans but there’s plenty to keep you entertained.

Considering the pressure that Edwards was under to do justice to the classic and improve on the previous film, Godzilla is a remarkable film. It isn’t perfect but Edwards once again proves that he is a talented film-maker. The less is more approach isn’t in keeping with the blockbuster monster movies that we know now but that doesn’t mean it’s bad. With a few tweaks to the narrative and more dimension to the human element, this film would have been as astounding as its title character.