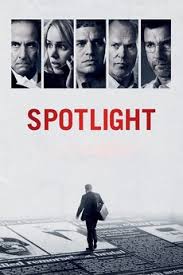 There was no real obvious contender for this years Best Picture Oscar. There were the three main possibilities The Revenant, The Big Short, and Spotlight. Then there was Room and Bridge of Spies which had both received a lot of attention but, in terms of this category, couldn’t really compete with the main three. Following on from these still realistic nominations there were the typical outsiders. Films that audiences loved and were great in their own way but that would never appeal to the voters. The Martian and Brooklyn were both films that people enjoyed but were never going to get the big prize. If you ask me, it was the final nomination Mad Max: Fury Road that really deserved the prize but I also have to admit that there was never any chance the voters were going to admit that George Miller’s masterpiece should win. So, it was always a bit of a mystery who would win last Sunday. All I knew is, I didn’t want it to be The Big Short.

Thankfully, Adam McKay’s disappointing look at the financial crisis of 2008 didn’t succeed and the more deserving Spotlight got its place in the, well, spotlight. It is the true story of the reporters from the Boston Globe who uncovered the years of abuse kept hidden by the Catholic Church back in 2002. It has a stellar cast and treats the real life drama with the respect it deserves. It is also very un-Oscary in its own way.

The narrative follows a small group of reporters who spend their time digging deep into the paper’s big stories. When a new boss takes over, he insists that they start looking into the accusations of abuse surrounding one particular priest. What they find is a  problem that runs much deeper than they could have ever imagined. With Catholicism being such an important part of society, the paper have to be careful how they handle the investigation and come across resistance from both the Church and its supporters. For much of the narrative, important and revealing documents are sealed during a legal case fighting to make them public.

It’s a difficult story to deal with and most of the “action” actually involves the group of journalists checking records, meeting sources, and discussing how to proceed. It doesn’t go down the typical Hollywood route and romanticise journalism. It shows the very long, painful and slow process that was needed to get all the facts. Despite the fact that the story broke nearly 15 years ago, Spotlight treats it in such a way that is seems fresh and just as much of an outrage as it was the first time. This isn’t a Hollywood tale

Where Spotlight really wins the day is having enough insight to tell the story as it really was. The facts are on display and the story has neither been embellished or polished to make it more marketable. It is the representation of real people doing their job and wanting to make a difference. It isn’t tempted to turn them into superheroes struggling against the odds but is rather content to show good journalists doing their research. And it’s still a thrilling and enthralling film.

It’s very unshowy and doesn’t really present itself as an Oscar contender. There are no major moments of acting included to make the voting panel sit up in their seats. It’s a very sedate affair and the cast are quietly brilliant in playing their parts. They deal with the topic with the same sombre attitude that director Tom McCarthy does. Everybody is aware that it is the story that matters here, the victims of the abuse, and not the journalists themselves. They are heroic in their own way but neither the film nor the cast try and glorify the people at the front of this film.

It’s a very honest narrative that doesn’t fail to throw shots back in the paper’s face. The Catholic scandal ran so deep because nobody wanted to see it. We discover that the paper itself made mistakes in the past and are forced to come to terms with face-to-face with their unwillingness to go against the status quo. It is a stark reminder of how recent this revelation really was and how easily people were willing to accept the Church’s response. The film doesn’t have the kind of superheroes fighting the big baddie you’ll see advertised throughout this year but it shows that, without people speaking out, corruption like this can go unnoticed for years.

The film constantly talks about the fear that the Catholic Church will come after Spotlight for their investigation. This isn’t in the All the President’s Men sense: this isn’t a threat of violence. It is a treat of being excluded. We are talking about a society where a nod, a nudge or a free drink are enough to get people to keep shtum. Spotlight isn’t a dramatic and over-the-top narrative about uncovering corruption. It is a tense, sophisticated and sensitive treatment of a real-life problem. A deserving winner of the Best Picture Oscar.