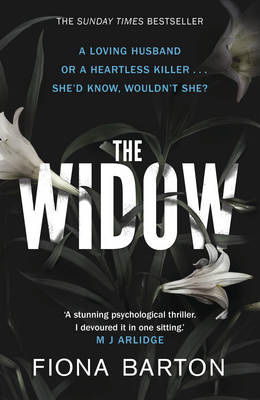 So yesterday’s rant wasn’t the greatest testament to my level-headedness. It was self-indulgent and angry even for someone with a history in general ranting. Still, as a normal human being I tend to lash out when someone I care about is threatened. There are only a few things in life that are certain to get me really fucking angry and that’s one of them. Another good bet is a really shitty thriller that is mistakenly being hailed as the next big thing. I’m really the only one to blame because I keep buying them. I know by now that it’s not my thing and, more often than not, author’s just don’t dig deep enough into the mind of a criminal/psychopath/sociopath/whatever. I just expect more and no half price hardback, especially when it’s a debut, is not going to deliver what I need. Still, when The Widow by Fiona Barton appeared in front of me one day, I let myself believe that maybe this time was the time.

The Widow is the debut novel of British journalist Fiona Barton. It carries on the trend, no doubt brought to the world of literature thanks to the popularity of Nordic Noir, of focusing on the minutiae of criminal investigations. It tells the story of Jean Taylor, wife of the recently deceased Glen Taylor. In the wake of Glen’s death Jean is hounded by the press because, in the years before he died, Glen was the chief suspect in the disappearance of a toddler, Bella. Jean is finally ready to tell her side of the story but just how much did she really know about what her husband was up to?

The novel is divided into chapters primarily based on the perspective of the widow herself, a journalist keen to bag an exclusive interview, and the chief detective in the case. However, it is only Jean who gets the privilege of first person narration. This is her story and it’s only her head we get to see inside. We must see behind the façade of the grieving widow to see the glimmer of relief that her husband’s “nonsense” is now over. Barton is obviously ambiguous about Jean’s involvement until the last and leaves little phrases such as that hanging to draw her reader on.

Rather than being a crime thriller, The Widow seems more comfortable in exploring the relationship between the police, the media and, the victims or witnesses of crimes. The police and the media need each other in the line of duty and Bella’s mother must utilise her time in the spotlight to manipulate the public into still caring years after the event. Understandably, the novel is on much firmer ground during the chapters from the point-of-view of the crime journalist, Kate Water, who knows exactly how to use her feminine sentimentality to get people to trust her and agree to her demands. Her understanding of just how far she must be and is willing to go to get her scoop.

What the novel does less successfully is dramatise a crime. The story of a lost toddler is certainly a harrowing one and explains why Barton didn’t keep trying to ramp up the tension with extra bodies and more drama. However, in terms of psychology, there really is little insight into the criminal mind. This isn’t the story of a crime but a story with a crime somewhere in the mix. The drama and shock value is basically non-existent and, at the final “shocking” reveal, there feels to be far less pay-off than the novel required.

This is a good representation of the media’s place within a criminal investigation but, beyond that, The Widow had little to offer. Yes, Barton attempted to create depth in Jean but this is only really evidenced through her obsession with children. That’s the extent of the psychology of the main character: women want kids. Jean is by no means a sympathetic character and is difficult to get on board with. This, however, is not enough to make the novel unsettling. I never got a sense of the importance or the awful consequences of Bella’s disappearance because Barton mentions it in such a casual way. Maybe if the crime itself was allowed to be more of a central aspect of the story then Barton’s novel would have had more of an impact.

BOOK REVIEW: Case Study by Graeme Macrae Burnet
Yesterday @suzie_reads_a_lot tagged me in the #endpaperporn tag. So, I dug out some of the prettiest end pages that I could find in my collection.
QUESTION: What was the last book you bought?
BOOK REVIEWS: Short books I listened to last week
QUESTION: Do you have any books you read every Halloween?
QUESTION: what do you think about accents in audiobooks?
QUESTION: What are you currently reading?
BOOK REVIEW: Burn by Patrick Ness
QUESTION: What spooky books are you reading for Halloween?