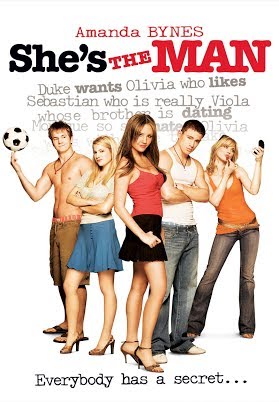 I got the idea to review this modern Shakespeare film after I shamefully clicked on an article about actors hooking up on set. Two revelations came from this simple act: Firstly, when I’m bored enough I’ll click on any old shit and, secondly, Channing Tatum must be super glad the Amanda Bynes things didn’t work out. So this Twelfth Night update has been in my head for a while and, as someone who loves to talk about shitty updated Shakespeare films, I sort of wanted the chance to revisit it. However, it was only once I’d started writing that I realised it might be a bit misjudged when taken alongside my Tuesday review. Talking about real-life trans woman Lili Elbe alongside a film called She’s the Man might seem at best stupid and at worst offensive. Still, it’s too late to go back so I’ll have to hope I’m just being a little too neurotic.

She’s the Man updates Shakespeare’s tale of cross-dressing twins. However, instead of a court in Illyria the action centres around the soccer team of an elite boarding school. When he high school girl’s team is disbanded due to lack of funds, Viola makes the unusual and fucking drastic decision to pretend to be her twin brother, Sebastian, so she can play for a male team instead. Even though it’s bizarrely easy for Viola to convince everyone she’s actually a teenage boy, she does run into some issues along the way.

In keeping with the original she unwittingly enters into a weird love triangle. Turns out Sebastian’s roommate is the incredibly hot and often shirtless Duke (Channing Tatum) and Viola struggles to keep her attraction a secret. Duke is in turn after Olivia (Laura Ramsey) who actually has a thing for her science partner, Sebastian. There’s a lot of misunderstandings, hijinks and cosume changes in there keep the film going for that little bit longer than it needed to. It’s safe to say there is a lot of unnecessary game playing and twists in the narrative before we arrive at the inevitable happy ending.

She’s the Man isn’t just a bad adaptation of a Shakespeare play; it’s a bad film. There is very little to rave about here and during most of my time watching I was just fucking aghast that we were expected to believe Amanda Bynes can pass for a boy. We’re meant to accept that when her actual brother shows up nobody seems concerned that Sebastian starts to look and act completely different.

Everything about this narrative is horrible. There is no real thought process going on here. It’s literally just dumped Shakespeare’s narrative in an American high school and let things go whichever way they please. The narrative just runs away with itself and there was clearly nobody able to control it. It got to the point where the writer’s felt they were doing their job properly as long as everyone interacts with each other at some point.

The main performance by Bynes, in both roles, is just over-the-top and a massive assault on your senses. The comedy is driven through completely misguided attempts at slapstick and an obnoxious use of gender stereotypes. Bynes’ presence on screen is just very big and very bad. You can see that she’s trying to play it for laughs but nothing ever pans out. She’s not a natural comedian and her physical comedy is just a little too on the side of awkward to really land.

Of all the plays to adapt, Twelfth Night is one of the stupidest. It’s always been a bit of stretch even compared to his most ridiculous cross-dressing plots. At least the original has enough wit within its script to obscure the daft premise. She’s the Man has nothing to fall back on. It isn’t winning with its narrative or screenplay. It also fails to draw you in on an emotional level. It’s obvious that the two main characters are destined to end up together but there’s nothing about them that makes you give a damn. It’s all just vacuous, high school movie nonsense… and I say that as someone who’s standards are pretty fucking low when it comes to teen movies.