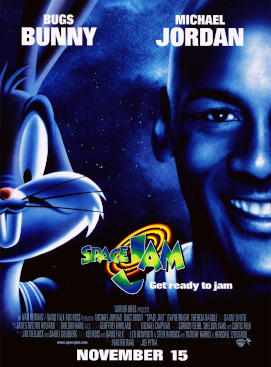 When it comes to these throwback Thursday posts, I like to try and tie in my nostalgic lookback to my Monday post. Sometimes this is nigh on impossible and I just pick something at random. Other times I’ll just make a really tenuous link and hope for the best. Then there are times like this: times when everything falls into fucking place. Monday saw me reviewing The Martian and discussing one man’s struggle in space. To go with it I chose a film about one man’s struggle with beings from space. It also happens to be the first film I saw multiple times at the cinema. I fucking loved it and I still do. Every time I watch it I feel like a kid again. Suffice it to say, this probably won’t be a very objective review… but considering Space Jam is fucking awesome it doesn’t really matter.

The other week at work we had a debate: did I prefer Who Framed Roger Rabbit? or Space Jam? It was a difficult question because my brain refuses to let me forget that Roger Rabbit is a much better film. The story, script, execution: it’s just better. However, my fucking heart just can’t deny how much I love Michael Jordan’s battle against basketball pro aliens. I mean that sentence alone should get you excited.

Space Jam was Warner Bros. attempt to revive their classic Looney Tunes characters whilst utilising Michael Jordan’s immense star quality. They weren’t that successful at carrying out their aim but they create on hell of a film. The story takes places straight after Jordan announced his first retirement from basketball and shows his attempt to break into baseball. Turns out the reason Jordan returned to the NBA was thanks to bugs bunny and co.

These familiar cartoon characters are threatened by a horde of tiny aliens intent on kidnapping the Looney Tunes and putting them centre stage in their galactic theme park. Apparently the only solution is to challenge their minute foe to a basketball match, despite the fact that non of them have any real experience of the sport. Fucking obvious. So when the little aliens steal the talent of some of basketballs big hitters and grow to be fucking huge the Tunes realise they’re pretty fucked.

That’s where Jordan comes in. Pulling the ex-star into their cartoon world, the Tunes persuade him to coach their team… with hilarious results. Really, you shouldn’t really give a shit about the plot because it’s clearly just the first way some executive thought up to mix together Bugs Bunny and Michael Jordan. It doesn’t really matter and it doesn’t really make sense. It’s fine though. That’s not what this film is about.

It’s about fun. Batshit crazy, basketball fun. Space Jam won’t appeal to Looney Tune purists. Certainly Looney Tunes veteran Chuck Jones was incredibly aggrieved by some of the sassy jokes and aspects of the plot. Yes, Warner Bros. attempted to modernise their old favourites somewhat. Of course they fucking did. Kids are what bring the money in. Space Jam still just a bright and crazy as always though. The spirit of the original remains there’s just more sexy female bunny love interests this time around.

And to his credit, Michael Jordan does a pretty good job at interacting with them. He plays down his role and never pretends to be the funny, cartoon guy. He plays it fairly straight and low-key. He’s obviously not the greatest actor but, for a basketball star, he plays against imaginary bunnies and ducks like a fucking pro. Then again, he is only being asked to play Michael Jordan. He should have that down.

The other human characters are hit and miss but there are some fantastic appearances from comic big-hitters Billy fucking Murray and Wayne Knight. Murray’s cameo in the film is both fucking amazing and totally fucking absurd. Still, it makes for a pretty great final act. That’s Space Jam in a nutshell: you’ll think it’s totally fucking crazy but absolutely love it despite yourself. Everything tells me that I should hate this film. It’s nonsensical, silly and totally focused on marketing. However, it’s such a fucking joy to watch.