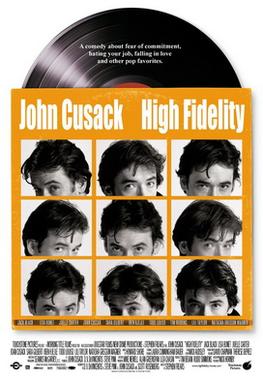 “What really matters is what you like not what you are like. Books, record, films – these things matter. Call me shallow but its the fucking truth”.

My desert-island, all-time, top five favourite things about the film High Fidelity, in no particular order:

1. The engaging narrative
When you really start to pull it apart, High Fidelity isn’t the kind of story that you’d get too worked up about. Rob Gordon (John Cusack) is a self-obsessed music lover who finds his life torn apart when his girlfriend leaves him. It’s essentially two-hours of a 30-year-old man moaning about how much the women in his life have fucked him up while refusing to accept his own failings. Spending his days in his quiet record store, mocking his small clientèle with his equally pompous employees Dick (Todd Louiso) and Barry (Jack Black), and creating Top 5 lists for every occasion.

However, being adapted from the novel by Nick Hornby, High Fidelity is so much more. It is a funny and totally worthwhile narrative. For most of it’s running time, the film wallows in the cynical attitude of its narrator and rejects traditional romantic tropes. That is until the ending when the film relocates itself into the cliche. Although, that sounds like much more of a cop-out than I meant it to. It’s impossible to reject the predictability of the finale because it’s so fucking predictable: you feel like you’re in on the joke. The fact that you let romance take its course means you, like the trio at Championship Vinyl, can feel superior to it. It’s fucking wonderful.

2. Its fidelity to the source
In his adaptation of Hornby’s work, director Stephen Frears manages to stay faithful to the original novel. A few small details are changed here and there but, ultimately, it feels like you’re watching Hornby’s story. Probably because the film has Rob quote large passages of Hornby’s original prose. Although, the decision to render Rob’s rants about life, love, music and his obsession with his past through monologues straight to camera are actually a bit hit and miss.

Watching it back now, there is something a bit dated and gimmicky about the decision. Plus, there is always the risk that when you break the fourth wall that you will shatter any chance for these people to seem real. Thankfully, Frears doesn’t rely too heavily on the technique and, in the latter half of the film, it becomes a less prominent feature.

Although, there is something positive to be said about these monologues: they succeed in ensuring that Rob remains the sympathetic character he needed to be. The film had to work hard to prevent these often pitying and angry rants turning Rob into a fucking whiney bitch. Once the narrative is filtered through Rob’s gaze everything becomes a consequence of his pain and emotional confusion. It’s hard not to side with him.

3. John Cusack
With so much of the film’s success riding on the portrayal of Rob, it was important to get the casting right. There is little doubt that John Cusack was fucking perfect. Cusack takes control of the screen from his opening line to the very end. He has a certain level of assurance and clearly knows he owns the role. At the same time, you need to warm to Rob to stick with him through all of his ups and downs. Rob isn’t the easiest person to like all the time but Cusack gives him heart and manages to make his debilitating lack of self-awareness seems like an adorable foible at times.

4. The supporting cast
Helping him along the way is one of the strongest supporting casts around. Jack Black is on great form and goes full-on buffoon as the pretentious, wannabe rocker Barry. He threatens to steal focus in nearly every scene he’s in and is a joy to watch. Although, equally memorable is Todd Louiso as the doe-eyed Dick. Then, Tim Robbins, in almost unrecognisable form as the hilarious caricature of the New Age man playing Laura’s new man, Ian.

Fairing much worse, though, are the women: unsurprisingly to anyone familiar with the novel, the film is very much one for the lads. The female roles are sadly lacking and those that do turn up are brief and 1 dimensional. Aside from Iben Hjejle as Laura, the women are relegated to secondary status. They appear as a parade of fantasy figures, docile little things or figures of fun. Of course, this is in keeping with the original novel and is a quibble that doesn’t completely stand up. I’d love it if the women were more important but it would have derailed an otherwise fucking loyal adaptation.

5. The Music
Really, the only major change to the book is the location: moving the action from Hornby’s London to Cusack’s Chicago. This Americanisation doesn’t really affect the story even if I did miss some of its original Britishness. I mean, if I’m being really critical, I could have done without the addition of the skater boys’ record, which feels rushed and unnecessary. However, it’s in no way a deal-breaker.

The change of scene also allows Frears to update Hornby’s musical references. High Fidelity is cool, modern (at least it was in 2000) and it fucking knows what it’s talking about. There is an overriding encyclopaedic love of music here and the film’s passion for the subject seeps out of every frame. The soundtrack is fucking flawless and, after every re-watch, I revisit most of the bands/albums name-checked in the script. And I still blame this film for making me believe that working in a record shop is the coolest job in the world.

Of course, there is the unavoidable sense that Rob and co’s obsession with music is problematic: in a sense, it’s a type of emotional arrested development. Throughout its praise of the music scene, High Fidelity excels at pointing out the failures of a certain kind of underachieving superfan. Although, it never goes so far as to openly attack Rob and his friends: there is no real critique here. Instead, it just lovingly chides his emotional immaturity while endorsing him wholeheartedly. Yes, he’s an annoying drifter who spends his time on lesser pursuits and ignoring adult life but nobody’s perfect.