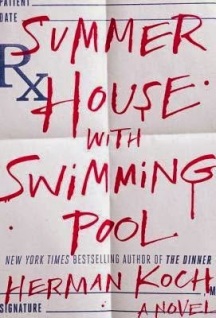 Another of Huff Po’s summer recommendations which, from their description, sounded like a simple and, hopefully, trashy murder thriller. I was desperate to get my hands on this book, particularly the beautiful hardcover, so I tracked down a copy from outside the UK to get it all the sooner. However, thanks to my increasingly short attention span, I finished The Enchanted and bought another huge pile of books that somehow managed to make their way to the top of my ‘to read’ pile. I seriously cannot be trusted in book stores these days. When I eventually got round to it I was once again halted thanks to my desperate need to criticise the fucking stupid binding that made page-turning a bit of a nightmare. Perhaps patience really is a virtue?

Summer House with Swimming Pool is Dutch writer Herman Koch’s follow-up to his critically acclaimed The Dinner (2013) and having not read that I wasn’t entirely prepared for the dark and psychosocial nature of this family doctor’s tale of revenge. Dr. Marc Schlosser runs a GP’s practice out of his home and, thanks to his ability to indulge his patients and liberal medication handouts, has become a favourite of the rich and famous. Narrated from his point of view, it is blatantly obvious that Marc, rather than fawning to their fame, views his patients with a cynical eye.  We learn early on that one of the Doctor’s patients, famous actor Ralph Meier, ends up dead and through Marc’s retelling of the days preceding this tragic event we are set to learn what happened.

Flattered by the attention the famous actor is giving him and drawn to his long-suffering wife, Marc pursues a friendship with the lustful leading man despite his own wife, Caroline’s discomfort. Following his hidden sexual desires, Schlosser packs his wife and two daughters off to spend the summer with Ralph, Judith and their sons. Despite getting caught up in the seedy excitement of his blossoming affair and the glamour of Ralph’s lifestyle, Marc looks back on this time with regret and tells us from the off that something horrible happened that will haunt him forever. In a similar way to his previous work, The Dinner, the entire plot revolves around this one act of violence with the first half of the novel foreshadowing its arrival and the latter section dealing with its consequences.

The narrative, whilst remaining in an arguably real setting, has a tough time remaining in the plains of believability. Clearly aiming for something artful and inventive, the novel regularly falls back on clichéd and fairly obvious outcomes. Though it is the ending that really lets the whole piece down by feebly tying up certain loose ends but ignoring several important questions and asking a few dozen more pressing ones. Knowing the biggest plot points from the outset means that, for the final chapters at least, Koch and the reader are just along for the ride. It is difficult to care about key revelations in the end and, when they do eventually come, they have much less impact than the previous narrative has prepared you for. Considering the first half of the novel tells us how important and life changing events will be for Marc, they are brushed aside at the close with an annoying nonchalance.

With only two fairly uninspiring mysteries left for the reader to solve, Koch often withholds snippets of information and delays admitting certain truths to the reader. Rather than acting as a clever way to create a sense of tension, the narrative suffers from an infuriating vagueness. I mean we’re never fully sure of what country we spend the majority of the time in and it is an evasiveness that adds absolutely nothing to the novel. Although, I can see how this kind of writing can appeal to a certain type of audience and, in the same way that Dan Brown’s mini-cliffhangers at the end of every chapter, will get people to keep reading the inner thoughts of such an awful human being.

Whilst I don’t argue with the decision to place an abhorrent character at the heart of a novel, I did find Schlosser’s narration to become incredibly grating at times. He rambles on about ridiculous tangents in the hopes of getting to grips with human biology and psychology. Rather than astutely getting to the heart of what makes a man, this postulation would often only inflate a rather mundane plot with an overdose of cynicism and pseudo-insightful bullshit. For a lot of it I embraced this dark look into the human psyche of a supposed loving family man but it is a device that Koch relied on far too much. I’m all for narrative detours but only when they remain convincing in their own right: many of Marc’s musings often just feel unimpressive.

Well that’s when they aren’t making your skin crawl, of course. Many of his observations regarding mankind in general but, specifically, his obese and overindulgent patients are grotesquely clinical. There is a great deal of dark humour throughout the first half of the novel that, unfortunately, occasionally spills into the realm of too uncomfortable. I read this before bed for the two nights it took to get through and they were two of the unpleasant sleeps I think I’ve ever had. This novel, in an ultimate form of car-crash fiction, simultaneously draws you in whilst pushing you away with its incessant detail.

Where Koch succeeds the most is in his moments of satire: with biting examinations of both the cult of celebrity and the modern medical profession. Over the years Marc has become more than a little disillusioned with his position in the grand scheme of things and has accepted his place as a way to prevent more important people suffering undue stress. However, he still views himself above his patients who he comes to view their social standing with a mixture of contempt and slight envy. As an actor Koch is perhaps venting some of his personal opinions as he attacks the fakery and narcissism of the film industry. It is exactly the kind of trash that I was hoping for.

I can see why this novel was recommended for a key summer read because, despite of all of my criticisms, I found myself to be engrossed with this ridiculous tale. It is a thrilling and easy read that will keep you entertained enough with its unstoppable dark comedy and social commentary.  Certainly not a novel that feels in keeping with the praise steeped on his previous works but also something that I don’t regret reading.