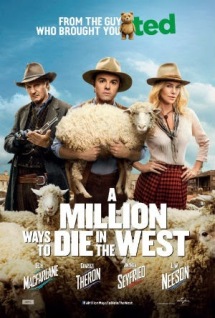 Not that I want to start sounding like a broken record but I’ve often thought Seth MacFarlane is my ideal man. He’s clearly hilarious, likes classic musicals and sings like fucking Frank Sinatra. Due in part to my continuing romantic delusions, I was very much looking forward to his latest film A Million Ways to Die in the West. To be honest though what isn’t there to be excited about? Wild West setting, Liam Neeson and Charlize Theron, and a shit ton of gratuitous violence: sounds ideal.

A Million Ways to Die came about after an off the cuff remark about how shitty it would have been to live during this deadly time period. MacFarlane set about researching American history and a full script was created with the help of his regular collaborators, Alec Sulkin and Wellesley Wild. After the huge success MacFarlane and co had with Ted in 2012 there was a great deal of anticipation for this star studded follow-up.

Unlike his decision with A Million Ways’ predecessor in which only his voice was featured, MacFarlane steps into centre stage and casts himself as our leading man. Albert is a mild mannered sheep farmer who is not only bad at his job but also ill suited for life in the Old West. After losing his girlfriend, Louise (Amanda Seyfried) to his moustachioed nemesis Foy (Neil Patrick Harris), Albert challenges him to a gunfight. With some help from the mysterious and beautiful Anna (Charlize Theron) Albert montages his way to becoming a successful cowboy.

Anyone who knows of MacFarlane’s back catalogue will know that his sense of humour often falls on the wrong side of crude or risqué. Unfortunately for A Million Ways, the humour also falls, at least predominantly, on the wrong side of lazy. There are a fair few laughs to be had along the way but there is little to get inspired by. The film has delusions of grandeur and believes itself to be something akin to Blazing Saddles. Sadly though, MacFarlane’s second-feature film just comes across as one of the dribbling patients in the corner of a mental hospital dreaming that they’re someone else.

I doubt the humour is helped by MacFarlane’s performance. We all know he has a pretty tight grasp on comic timing but place him in a live setting and everything becomes awkward. He just looks uncomfortable on screen and there is never any sense that Albert is anything other than MacFarlane but surrounded by sheep.

Thankfully the rest of the cast are on steadier ground and both Sarah Silverman, playing a pious prostitute, and Alex Borstein, as the whorehouse Madame, offer us some straight shooting comedy in an otherwise aimless affair. Also, for the limited time he gets to do anything, the great Liam Neeson is a standout as the fearsome gunslinger Clinch. However, he is relegated to an underused side note with no real drama and even fewer jokes.

This isn’t the tightest script ever written and the action gets lost in a great deal of unnecessary subplots. Unfortunately, we are also presented with undeniable proof that MacFarlane’s trademark patchwork narratives doesn’t work in a normal full-length feature. There are some funny moments that pop in and out but the often take precedence over the main story. More effort is put into creating singular moments, sight gags and pop culture cameos than there was put into creating a clever and logical storyline.

I wanted to like this film but ended up being incredibly disappointed. There was very little that I could celebrate in the end. Although, there is no denying that the visuals of A Million Ways are good enough to rival any classic Western and Joel McNeely’s musical score is something pretty magical.

It’s just unfortunate that this whole project is just tainted by MacFarlane and co’s vanity post-Ted. It was a fun idea to begin with but it seems to have spiralled out of control. With a plot that makes several detours through Native American Communities and group dance routines and a leading man who is clearly overwhelmed by the role, A Million Ways to Die in the West just feels like an amateur film students hastily written Western parody which, for some stupid reason, wasted many of its greatest moments on the trailers.