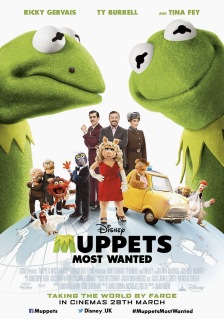 I, as you probably know, am an unashamed Muppet maniac. I vehemently defy anyone to tell me they aren’t funny. It was a bleak world when the Muppets ceased to appear on the big screen. Thankfully I was not the only person who thought so and back in 2011 Jason Segel and his co-writer Nicholas Stoller set out to reintroduce the Muppets to a modern family audience. Their resulting film proved to be a hit with both critics and audiences alike and Disney swiftly signed up the furry stars for a sequel. This sequel has been hotly anticipated and, for a time, it seemed that a week didn’t go by without another big name star signing up for to play a role in the second part of Kermit and co’s comeback. The first real piece of news was that Jason Segel wouldn’t be returning and, to be honest, I couldn’t be happier. Don’t get me wrong Jason Segel did a great job with the script and is a decent enough actor but I was kind of bored by his whole romantic plot. I’m a bit traditional when it comes to my Muppets and I prefer hilarious chaos rather than romantic comedy. However, I did enjoy the film and felt it was as successful a comeback as everyone else. Unsurprisingly, I have spent the year eagerly awaiting the release of the follow up: if only to experience more of Bret Mackenzie’s sensational compositional work.


The major thing to realise upon the opening sequence of the follow up to 2011’s rebranding effort, The Muppets, is that both Kermit and Miss Piggy are present. If my memory serves me correctly this is the first film in which everyone’s favourite diva swine is present from the get go. After the success of their first (ok their 8th) outing the Muppets realise that they have been rewarded with a sequel so set about trying to find a decent plot. Handily the Muppets use their opening number sets out to lower the expectations of its audience by explicitly stating how disappointing sequels usually are.

Wondering about the best way to build on their recent success they decide that the only way is to embark on a World Tour. Joining them is the mysterious Dominic Badguy (Ricky Gervais) who cunningly takes control of the gang and leads them to various European capitals. Along the way he orchestrates a plan to replace Kermit with the newly escaped Russian villain, Constantine, whilst shipping Kermit off to a Serbian gulag run by Tina Fey.  Constantine and Badguy plan a series of thefts in order to pull off the greatest robbery of all time. A plot that leaves plenty of room for typical Muppet hi jinks.

However, unlike the first film Muppets Most Wanted ultimately lacks narrative structure and focus. The various plot lines meander along too slowly and drag out any dramatic or emotional potential. Rather than having a main aim (i.e. getting the gang back together to save the studio) and having smaller subplots along the way, you might be hard pushed to pick out one specific story as the main focus. We have the mistaken identity between Kermit and Constantine, Serbian prison, a series of robberies, the CIA and Interpol investigation, Walter’s rescue plan, Miss Piggy’s attempt to get Kermit to commit, and gulag’s annual revue. Phew. As if that wasn’t enough, the hotchpotch of stories is littered with as many pointless celeb cameos as Disney could possibly afford. (Now y’all know by now that Tom Hiddleston can’t do anything wrong in my

eyes but his seconds long part was both unnecessary and so built up in the marketing campaign that it’s laughable.) It lacks the heart of the previous film and, at times, just feels pretty shallow and desperate.

I guess, despite my initial celebration, this film misses Jason Segel: not on screen necessarily but certainly behind the computer. The script isn’t as tight or clever and ingenuity is replaced with spectacle. The reason The Muppets worked so well was because Segel was so utterly invested in bringing the group back onto our screen. His emotional connection was evident throughout his script and in his performance. His interaction with the puppets was amazing: certainly much better than Ricky Gervais who seems to carry everything out with an ironic or knowing glint in his eye. There is none of the tenderness that either Segel showed or Gervais has been known to show in other projects. His performance is an underwhelming, self-conscious show of the comedian at his most gurning.

To make up for this downfall the other two significant human roles are both memorable and joyous to watch. Tina Fey brings out her best dodgy Russian accent to play a character so dripping in stereotypes that it sort of becomes ok again. The scenes set in the gulag may be distracting to the plot but they are packed full of great Muppet-y humour. Even if the cameos from Jermaine Clement, Ray Liotta and Danny Trejo weren’t used to their fullest potential. However, it is Modern Family’s Ty Burrell is the most prominent performer and, spectacularly, has the most amazing chemistry with Sam the Eagle. Burrell plays a Clouseau-esque Interpol agent alongside Sam’s CIA agent as the pair follows the clues to find the burglar. He brings about some of the biggest laughs and turns a song written as exposition into one of the stand-out numbers.

Great musical numbers is something this film offers in spades thanks to more sterling work from Bret Mackenzie (one half of comedy duo Flight of the Conchords). Mackenzie was the person who brought the Muppets their first Oscar thanks to his incredibly well written song ‘Man or Muppet’. That song aside, I felt the soundtrack was a bit hit and miss though. There weren’t too many original songs and most of them were good but forgettable. This time around Mackenzie hardly ever falters. It is thanks to the musical numbers and their routines that the audience are able to stick with the hodgepodge that is the plot. I downloaded the OST as soon as I’d watch the film and I’ve not been able to stop singing them since.

Yes, Muppets Most Wanted may not be as accomplished or as neat a film as The Muppets was but, if I’m honest, I enjoyed it just as much (if not more). I can’t deny that this is probably mainly down to the Mackenzie but this feels like any other Muppet film. It’s silly, chaotic and feel-good. The Muppets are true to form and, Gervais aside, their human counterparts breathe life into the dwindling narrative: Tina Fey and Ty Burrell work well with the puppets and serve to highlight their co-stars instead of drawing focus. Of course, in my heart I know that I would have been happier if there were fewer shameless cameos and a tighter script but, as for showing the Muppets’ continued potential, I’d say Muppets Most Wanted does well enough.

Although, if Beaker, the Swedish Chef and Fozzie are doing what they have been for years then I guess I’ll always be easily pleased.