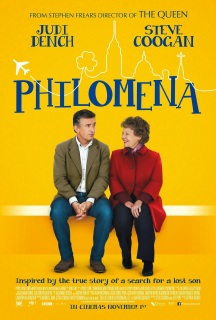 So whilst I’m planning a romantic valentine’s day with vampire Tom Hiddleston, a friend of mine is arranging to take her fiancé to watch the significantly unromantic Philomena: the adaptation of Martin Sixsmith’s book about an elderly woman’s journey to find the son she was forced to give up as a teenager. Not a terrible film but hardly the kind of film you’d consider for a romantic night out.

Philomena is a story that sheds light onto the despicable hypocrisy and cruelty that was tainting parts of the Irish Catholic Church. It is a heartbreaking tale but one that focuses its attention on one woman. This isn’t a hard-hitting exposé (see 2002’s The Magdalene Sisters) but is a film that highlights the human angle. Translating a deeply personal film in such a way that everyone who watches is can take something from it. Of course, there is always a danger when telling a human interest story that it could end up falling on the wrong side of schmaltz and trash but screenwriters, Steve Coogan and Jeff Pope, and director, Stephen Frears, handle it perfectly.

It is adapted from the true story of an Irish nurse (Dench) who turns to ex-journalist and disgraced Labour spin-doctor Martin Sixsmith (Steve Coogan) to help track down her missing child. In the 1950s the teenage Philomena became pregnant and was forced to take refuge at the convent of Roscrea. After the birth of her child the young girl (Sophie Kennedy Clarke) spent her days slaving away in the laundry room in exchange for a meagre one hour with her son. Until the day he was sold to a wealthy American couple and lost to her forever. Hearing the tale from Philomena’s daughter, Sixsmith picks up on the opportunity to heal his reputation and return to his journalistic career by writing a human interest story about the tragic tale. Their investigation takes them from the convent in County Tipperary, to the United States and back again.
The largest section of the film plays out like an odd-couple narrative where the endearing, working-class Philomena jars with the cynical middle-class man. He must bite his tongue every time Philomena rejoices about the simple pleasures she is exposed to and she can never quite work out when he is joking. There is a great deal of humour to be found within Coogan’s deadpan delivery and Dench’s adorable but slightly kooky performance as the leading lady. The finest comic sequence of the film is a beautifully delivered exchange revolving around her fondness for romance novels and Sixsmith’s disdain for the genre. Dench’s comic timing is spot-on and she easily ensures that Philomena doesn’t end up as a pathetic caricature.
The pair has great chemistry on screen but there always remains a distance between them. The film explores issues of faith and forgiveness throughout Philomena’s search: with Sixsmith adamantly pronouncing himself an atheist and Philomena sticking with her deep-seated faith despite everything she’s been though. Thankfully though, the script never moves into the dodgy territory of showing that the union changes Sixsmith’s life or vice versa. There is no attempt to have the holy woman leading the lost journalist back to the flock nor does Sixsmith try and push his religious anger onto his travel companion: they simply come to an unspoken mutual agreement to disagree.
Judi Dench is on fine form with her portrayal of Philomena. There is great depth behind the slightly delicate exterior. She is the kind of character that has served Dench well in the past: a quiet and composed exterior hiding the unseen trouble underneath. After hiding her shame and guilt for 50 years, Philomena approaches her search with a certain amount of trepidation but never loses her high-spirits or courage. It is a sophisticated and careful performance by Dench that has rightfully won her plenty of nominations this award season.
Coogan’s performance is more held-back but no less impressive. He is refined and restrained throughout. Whilst Sixsmith is never allowed redemption, mainly because he never believes he needs it, the journalist does find his voice. It is obvious that Coogan is a talented actor but he makes the decision to step back here. He keeps everything fairly low key and, even in Martin’s most emotional moments, never lets his anger spin out of control. Rightly, the moral and emotional focus here is Philomena and, under the steady hand of Frears direction, Dench pulls it off beautifully.
Philomena is a well-judged and well-balanced film that tells an upsetting story that is still light-hearted.It doesn’t shy away from revealing the harsh truths but ensures that there is always a pinch of humour to lighten the emotional blows that eventually hit you. It is a sophisticated and intelligent drama that will warm your heart despite its content.