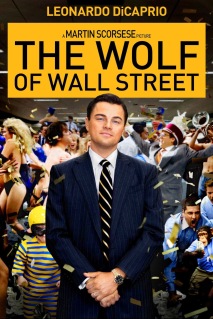 When it comes to saucy films my boss has strange ideas about what classes as outrageous. In his mind The Inbetweeners Movie is about as filthy as cinema gets simply because of the male stripper that appears about half way through. (With that kind of attitude I’d love to hear his reaction to Steve McQueen’s Shame.) He affectionately referred to Martin Scorsese and Leonardo DiCaprio’s fifth collaboration as “an orgy movie”. I’m not normally one who likes to agree with his hyperbolic and slightly priggish nature but I have to admit that he has summed up the film fairly well. So when another colleague announced that she was going to see the film with her father I couldn’t help but think the entire experience would be utterly cringey. I’d probably have run off to the toilets after 10 minutes and stayed there for the duration.

Wolf of Wall Streetis based on the 2008 memoirs of Jordan Belfort, a stockbroker who was found guilty of defrauding investors and laundering an insane amount of money in the 1990s. After making a deal to bring down his colleagues, Belfort only ended up spending 22 months in jail and was ordered to pay back $110 million to those he cheated (a sum he has only paid about 10% of so far). His memoirs became a huge success on their release and presented his story in humorous, rude and lascivious detail, giving an in-depth look at the money, drugs, cars, houses, yachts and hookers that made-up Belfort’s life for so many years.

Scorsese and DiCaprio remain pretty faithful to the book with their adaptation. There is an undeniable sense that this is Jordan Belfort’s film rather than a film about him, something only highlighted by the relentless voiceover explaining his exploits from start to finish. The Wolf of Wall Street is a raucous, incredibly caffeinated yet shallow epic that jofully embraces bad taste. The narrative twists and turns at break-neck speed through a series of events that make up Belfort’s life at that time. Scorsese presents us with an entertainingly outrageous look into the utterly debauched world of capitalist America.
After teaming up with his neighbour Donnie Azoff (Jonah Hill), Jordan finds himself with a new bro and business partner. They create a small team of money-hungry novices and work their way up from an abandoned warehouse to a multimillion dollar operation. These offices quickly become the setting for their newly adopted hedonistic lifestyle: housing drugs, gigantic parties, parades of dancing girls and gaggles of prostitutes within their walls. Eventually, Belfort finds his unfettered lifestyle is under threat from the Securities and Exchange Commission and an interfering FBI Agent (Kyle Chandler). Jordan and his friends are forced to take measures to hide their ill-gotten gains and smuggle their wealth to a Swiss banker (a delightful yet smarmy Jean Dujardin) with the help of family and friends (including a charming appearance from Joanna Lumley despite that weird romantic clinch).

Scorsese’s approach here feels much straighter that a lot of his work. There is an increased focus on the
script and an increase in longer shots and more intimate scenes. It is hardly his most subtle work to date but there can be no doubt it is one of his most exhilarating and energetic. It is also his most obviously funny work with several glorious moments when DiCaprio proves his talent for physical comedy. Take, as an example, the scene in which Jordan, off his face on an extremely rare form of Quaalude, must drag himself back to his car after losing control of his limbs. Then we have the glorious face-to-face of Belfort and the investigating agent aboard his yacht. It is a sharp, witty and tense scene that lifts the entire film. It is clear to see that the director’s early energy has come flooding back. This is the kind of film that was made for Scorsese: a criminal’s story of survival. Like much of the great director’s filmography, it involves an antihero who constantly pushes our sympathy to the very limits. It is only thanks to the team involved that the three hours you spend in Jordan Belfort’s company doesn’t drag.
DiCaprio was a bold choice for the despicable Belfort and the actor is able to use his inherent charm to ensure that no matter how outrageous Jordan’s behaviour is never feels completely unpalatable. Belfort uses the same silver-tongue that helps him defraud investors to win the audience round to what he has to say. You never really like the guy but there is something about him that you can’t help but admire. With obvious references to the current cult of celebrity, the film places Belfort in the role of a rock star where you see him addressing rooms full of excited and adoring employees. It isn’t a film that exonerates Belfort but there is a certain amount of flattery within the condemnation.
Of course, this film would never hold up if its lead man wasn’t willing to go all out and Leonardo DiCaprio once again proves that he has an awful lot to offer. For the second time in his career moves into the murky water of playing a dislikeable character (the first being his triumph in Quentin Tarantino’s Django Unchained) and he is clearly relishing it just as much as he did the first time. This is without a doubt one of the performances of his career.
Wolf of Wall Streetmay have easily become a career highlight for DiCaprio but it isn’t quite up there with the very best of Scorsese. There are moments when this simply doesn’t feel like a Martin Scorsese film. In no way a failure for the accomplished director but lacking the finesse and polish of his vast back catalogue. The editing can hardly be described as sloppy but there are moments when it feels as if something is missing: a fact that is easily explained considering Scorsese has an additional hour of material to add to his director’s cut. There is also a slight confusion in the regards to the function of Belfort’s voice-over. He stops the story whenever he feels the need and commentates on all of the action occurring on screen. However, it is never clear who exactly Belfort is meant to be talking to and what this voice-over is trying to achieve.

Nevertheless, this is still a Martin Scorsese film and there is never a moment when you feel everything is
getting out of control. He is clearly still in command and his close relationship with DiCaprio has provided us with some fantastic examples of filmmaking. To aid his talented leading man, Scorsese has assembled one of the most incredibly well-rounded ensembles imaginable. First and foremost we have Jonah Hill playing Belfort’s hedonistic and slightly nerdy sidekick who manages to create some memorably comic moments whilst never going all-out goofy. The brief but amazing scenes featuring a still emaciated Matthew McConaughey at the start of Belfort’s story are some of the best of the film. Despite the fact that McConaughey’s presence is fleeting it is deep-seated: he is not only hysterical but also the initial inspiration for Jordan’s future professional and personal choices. Finally, Margot Robbie stands-out from the crowd and not just because she is the most significant female character on screen. She is excellent in the role of Belfort’s wife who slowly becomes the only real emotional and moral compass in the film.
Of course, the question of morality has been a key one since the film’s release with the major argument being that Scorsese glamourises Belfort’s world rather than criticising it. There is a darkly comic tone to the film thanks to Belfort’s unwillingness to show remorse and the lack of any real narrative reprisals. However, we can hardly believe that Scorsese is continually throwing such outrageous depravity in his audience’s face to push them towards that lifestyle. As I have suggested, this is a re-enactment of the events of Jordan Belfort’s life rather than a comment on his actions. The audience willingly inhales every grain of Belfort’s story but, as with every high, there is the inevitable and debilitating comedown. After overindulging on Belfort’s indulgent and extravagant lifestyle you are bound to have that same feeling you get after eating too much at Christmas dinner. Yes, there may be no definitive critique of Belfort but Scorsese is too good a filmmaker to think that the message isn’t there to see.