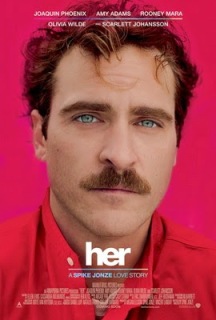 There is a face that people always make when you bring up Joaquin Phoenix’s name in conversation. Over the years the actor has built up quite a reputation for being wacky and abrasive. This is mainly thanks to his infamous appearance on The Late Show to promote his mockumentary I’m Still Here. Regardless of the way he has behaved in recent years, I still like Phoenix. He is a careful and considered actor who sometimes gets a little carried away with his roles. It takes a certain type of actor to basically front a film on his own and I was looking forward to seeing how Phoenix coped with it for Spike Jonze’s fourth film outing. So despite all of the groans I heard when discussing my excitement for this film, I couldn’t wait.

Spike Jonze is the kind of director who is known for creating worlds that show an uncanny relationship with reality whilst remaining ever so slightly bizarre and mystifying. (See Being John Malkovich and Adaptation for more proof.) In Her, Jonze goes one step further by tweaking a whole film genre. At its simplest layer, her is a romantic-comedy but following the emotional connection between a man and his computer. Jonze does a fantastic job of creating an unconventional movie romance that is funny yet heartbreaking, terribly sweet but utterly sincere.

Joaquin Phoenix plays Theodore Twombly a lonely man struggling after the breakdown of his marriage to Catherine (Rooney Mara). He becomes withdrawn from the world around him and guards himself from more emotional pain. As a technological whizz, Theodore invests in a new artificial intelligence operating system to provide himself with a virtual companion that has the ability to change and grown thanks to its experiences. The OS, calling itself Samantha (voiced by Scarlett Johansson), becomes a huge part of Theodore’s life and she begins to understand him better than any real person he encounters.
Her is Jonze’s first self-penned feature film and is beautifully crafted. It is set in a not-so-distant future version of Los Angeles in a kind of technological Utopia. Whilst dealing with such an odd concept the film manages to provide both a look into the future and remain convincingly contemporary. The future of Jonze’s her isn’t the blindingly bright one of most science-fiction films but offers a beautifully muted palette and equally muted occupants. With much of the exterior shots being filmed in Shanghai, the world around Theodore is a clean and safe urban environment inhabited by the young, beautiful and affluent.
Yet the aesthetic harmony of this setting does not overflow into the people who live in it. Despite this
technologically advanced haven, this is a society plagued by lonliness and Jonze makes it more than clear that Theodore isn’t alone in his emotional abyss. His friend and neighbour (Amy Adams) finds herself going through a divorce and ends up turning to her ex’s OS for friendship and support. This is a time in which technology offers a valid alternative to human contact. This film evaluates society’s dependence on technology and its deepening effect on modern relationships. Samantha may very well be a far-fetched idea but we see some familiar alternatives referenced on screen. In the earlier part of the film Theodore reaches out to the World Wide Web for companionship and partakes in cybersex with a woman who quickly turns out to be highly disturbed.
For further proof we need only look at Theodore’s work for beautifulhandwrittenletters.com which requires him to craft emotional outpourings of other people’s feelings for their family and friends. This is the way that love works in the world that Jonze creates: real love is painful and hard so feelings are outsourced to a stranger instead of coming from the heart. Jonze is suggesting that technology probably isn’t the solution to answering people’s emotional needs. Though Theodore easily falls in love with Samantha during their communication and experiences together there are the inevitable complications with this virtual relationship.

Although despite all of these complications, the greatest success of Jonze’s tale is that the romance between Theodore and Samantha is never played as anything other than serious and pure. Every aspect of the blossoming connection is dealt with carefully so that something that always feels a little bit iffy ultimately comes across as something sweet and rather beautiful. I mean it is highly doubtful that any director other than Jonze would have been able to make a sex scene between a man and his operating system feel anything but uncomfortable and seedy. Of course the decision to fade to black to avoid the awkward Joaquin Phoenix masturbation moment was a shrewd one. It is an odd feeling watching the blossoming relationship between a man and his operating system but there is never a moment when you aren’t drawn in by it. You happily follow the pair on all of their bizarre dates where Theodore, through his phone’s camera, shows Samantha the world around them.
Phoenix and Scarlett Johansson provide incredible performances in order to truly sell the relationship as it was dreamt up by Jonze. Phoenix may not be the name at the top of everybody’s list of actors to almost single-handedly sell a film but in herhe does so with subtlety and depth. He easily inhabits the role of Theodore and his portrayal of a man in such emotional pain that he clings to the inhumane embrace of Samantha is sweet and soulful. The journey that Theodore takes from melancholic withdrawal to an embrace of life is a touching one and without Phoenix in the driving seat this film could easily have derailed.
Of course without the right woman Theodore would never have struggled out of his emotional despair and if there was ever going to be one woman who could mend a broken heart simply with her voice it’s Scarlett Johansson. She gives the role the benefit of her unbeatably husky voice. Samantha is seductive, funny and confident yet still learning and vulnerable: there is no way that anyone in Theodore’s position would fail to fall for her with or without the physical presence of Johansson to back it up.
Although, Samantha proves to be too strong a presence for the vulnerable writer: she pushes Theodore well out of his comfort zone and into a complicated and passionate relationship when you suspect all he really needed was someone to talk to. Samantha’s programming ensures that she evolves with every new experience and she quickly outgrows both Theodore and the initial concept. Towards its denouement, the slick and inventive narrative begins to descend into familiar romantic-comedy territory. The ending feels slightly flat and unsteady when compared to the well-constructed moments that preceded it. Not terrible in its own right but still not up to the standard that the film set about promising us. This isn’t exactly Jonze at the very top of his game but, as a whole, heris a wonderful film. It is sweet, soulful and smart despite the unavoidably questionable nature of the plot. Paddling in the realms of science-fiction, Spike Jonze offers us a funny and touching analysis of modern human relationships. Just as Theodore fell for Samantha, I can confidently say that I love her.