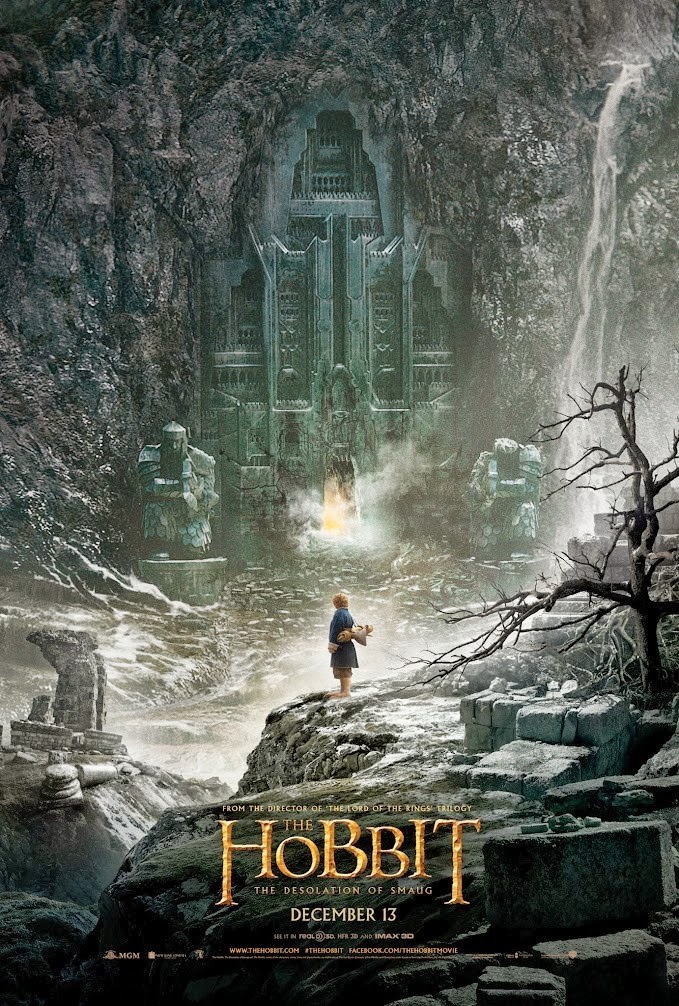 Unlike the first film, which many strange people argued was too sedate and slow, the second starts off at breakneck speed. Well after a brief flashback to Gandalf (Ian McKellen) and Thorin’s (Richard Armitage) first meeting. Then it jumps right back into the middle of the action where the thirteen dwarves and their two companions are still on the run from the bloodthirsty Orcs on their tale. What follows is a fraught 100 minute long escape from this continued enemy and several new foes, including giant spiders, kick-ass elves and fishy townspeople. It is a relentless race to a seemingly unreachable mountain that never stops throwing menace into the equation. Jackson’s decision to turn the simple quest into something more exciting with this additional chase still drags down the plot but, once again, allows for some exciting action sequences. As unnecessary as this threat may be, it does allow for Desolation of Smaug’s most outstanding scene: a high-speed, head-spinning river barrel escape. The camera places the audience in the raging waters as Orcs descend upon the unprepared party. It’s the kind of sequence that wouldn’t look out of place in the Lego video game of the film and is as exciting, humorous and well choreographed as we’ve come to expect from Jackson’s Middle Earth.

Undoubtedly though, the biggest moment comes once we are already about 1 hour and 50 minutes into the film in an annoying attempt to keep the audience on tenterhooks. Bilbo takes his first shaky steps into Erebor and shrinks in the middle of a huge pile of gold and jewels. Although, you can’t help but realise that there is one thing missing: we came here looking for a dragon and we’ve been waiting for nearly 5 hours so it needed to be spectacular. Smaug is a revelation of CGI: helped immensely by Benedict Cumberbatch’s spot-on voice and motion-capture performance. Thanks to the same process that brought Gollum to life in a disgusting and creepy manner, we see the Sherlock star’s menacing grin in the face of the monstrous creature. It’s mesmerising. You will most certainly watch on in wonder as he emerges from a pile of coins and slinks around his lonely mountain kingdom with a bellyful of fire ready to be unleashed at any moment.

The face-off scene is no less disappointing and very nearly lives-up to the Hobbit’s previous memorable tête-à-tête with the wretched Gollum. The encounter has everything it needed: humour, tension and genuine threat. After attempting to steal back Thorin’s prized Arkenstone, Bilbo the thief is discovered by the deadly dragon and must appeal to his vanity to save his life. It is a scene that relies on words and cunning and is something that stands out in this otherwise hectic film. However, this reserved but brilliant exchange must inevitably give way to another over-the-top action sequence in which Bilbo and his friends come up with the most complicated escape plan in the history. It is once again a joy to watch but I can’t help wishing things had been a little subtler in terms of moving the plot forwards.

Of course whatever you might think of the narrative on show, Peter Jackson and his team have created another masterpiece. The land of Middle Earth continues to be imagined with mind-blowing detail and care. Thankfully, this instalment offers Jackson and co. the chance to create as yet unseen landscapes instead of just reintroducing the audience to Bag End and Rivendell and it makes all the difference. With the hazy forest of Mirkwood, Thranduil’s woodland kingdom and the vast, glassy lake on which Esgaroth lies, there is a never-ending ocular feast for the audience. Even the already seen Dol Guldur gets a sinister make-over in this second instalment as Jackson highlights the growing darkness that is slowly and silently taking over Middle Earth.

Dol Guldur is the setting for another stand-out sequence and it is one that both delighted and left me in a bit of a quandary. Whilst memorable in its own right, the big moment when Gandalf has his first face-to-face with the illusive Necromancer is also the moment when I really began to agree with the critics who believed Jackson was dragging this out a bit. There is a lot of impressive action and visuals but Sauron still looks a bit too much like the smoke monster from Lost to be really terrifying. Plus, we already know who he is and how the story ends so the dramatic tension of this reveal is weakened.  For the first time I found myself wondering if Jackson had gone too far making this new film an out and out prequel to his incredibly popular trilogy.

Even the comic and joyful tone of the original story is lost thanks to the increasingly sinister tone that is overtaking everything. The Desolation of Smaug is a truly dark film. I lost count of the number of times someone was decapitated or tortured. Now as a stand-alone Peter Jackson film this isn’t a bad thing: after all nobody quite manages to blend dark forces with comic moments and emotional touches in the way that PJ does. However, as an adaptation of The Hobbit it is starting to wear a little thin. Admittedly, Tolkien thought about rewriting his lovely children’s tale to give it a tone more in keeping with the later trilogy but he continually changed his mind. The Lord of the Rings is shrouded under the dark cloud of Sauron whilst The Hobbit is a much lighter and comic tale because that threat doesn’t exist yet. There are some brief glimpses of comedy within the narrative where Martin Freeman gets the chance to show us the kind of character Bilbo could have been. He was born to play younger Bilbo but he simply isn’t being given enough to do. His comic, dramatic and emotional potential is lost in favour of the Dwarf’s greedy quest. Aside from the Smaug face off and a few brief moments with the ring, Bilbo is fast becoming a bit part in his own life story.

Lack of character development is still a problem within the Dwarf party as a whole. Aside from Thorin, there are only a handful that have been properly introduced and only Kili (the pretty one) who is given any real material to work with. This is fine until the party splits in two with Thorin, Bilbo et al. going one way and Killi, Filli, Balfor and the other one staying in Laketown. I have no major issue with this split but, keeping most of your recognisable Dwarfs away from the Misty Mountain did give the impression that the great party that had set out from Bag End had suddenly shrunk down to two Dwarves and a Hobbit. Something that is most disconcerting when loads of them kept popping up in Erebor.

However, there are some more glimmers of hope within the new cast members. Most notably being the elves of Mirkwood. Many die-hard Tolkien fans may object to the return of Orlando Bloom’s Legolas (and I admit I was in two minds about it) but there can be no denying that this is one elf who is too fucking awesome to ignore. He brings some much needed action and general kick-assery to this sequel. Plus, he has a new companion in the feminine form of Tauriel: a Peter Jackson original character who adds a much needed strong female presence to the proceedings as well as a strange flirtation with Kili. Again, I’m not sure how I feel about this dwarf-elf-elf love-triangle but it wasn’t laid on as thickly as I initially feared. I’ll have to wait and see how it proceeds next time before I decide whether it holds a significant place in the narrative or is simply a chance to allude to the Arwen/Aaragorn/Eowyn romance of the previous films.

The two brightest stars to come out of The Desolation of Smaug (after Dragon breath himself) are Legolas’s father Thranduil (Lee Pace) and Bard the Bowman (Luke Evans). Thranduil is not your typical Elven king. Everything he says is dripping with potential threat and he constantly looks ready to chop your head off if you say the wrong thing. Lee Pace plays the role perfectly and any time that Thranduil is on screen (not nearly enough if you ask me) he commands your attention. I can’t wait for him to participate in the Battle of the Five Armies. He’ll kick goblin butt. As could Bard who, despite a fairly low-key introduction for him and his foreboding prophecies, will have a great part to play next time around. Luke Evans plays the hero in waiting with all the grim-face Welshness we could have hoped. His inevitable return is certainly something to look forward to.

So to conclude this unstructured and befuddled review I will say this: what Peter Jackson has given us with The Desolation of Smaug is a bloody good prequel to LOTR but a fairly annoying adaptation of The Hobbit. It is a great action adventure with some amazingly memorable sequences and settings. However, it is undeniably bloated and heavy-handed. This film deals with only a handful of chapters and the stretch is beginning to show. Just how many times can the group be captured before escaping in order to get captured again? In some ways it is better than the first (which I still really like) but in others it is disappointing. Sadly, there are a lot of people out there who vehemently disagree with Jackson’s approach with these films and will heap criticism onto a much-loved and talented filmmaker because his vision differs with theirs. I can’t place myself in this camp because, whatever else you think, this has all the trappings of a good Peter Jackson film. My suggestion is take a step back from the book that may or may not have shaped your childhood and just go with it… then go home and reread the book that may or may not have shaped your childhood.

Do you like sprayed edges?
Fancy some non-fiction for Pride? You could do worse than this graphic novel. It has a lot of background on queer activism and theory written for everyone to grasp.
Happy Folio Friday to you!
Opened up Instagram this morning only to discover it hadn't bothered posting yesterday's photo. Vwey annoying
I'm partly responsible for this month's book club pick because I suggested that we read it.
My latest review is this little gem. The Employees: A Workplace Novel of the 22nd Century might only be 130 pages long but it's a spectacular read.
Do you plan your monthly TBR pile?
Bonus Folio content alert!
Happy Folio Friday to everyone but especially to this edition of Gentlemen Prefer Blondes.