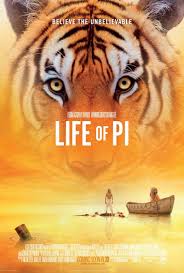 I have to be upfront with you all, my loyal readership, and say that I haven’t actually read the incredibly popular Booker Prize winning novel by Yann Martel. Life of Pi was one of those novels that everyone initially considered unfilmable until Ang Lee only went and bloody filmed it. Who would have thought it would be possible for an award winning director to produce the beloved story of a teenage boy getting into trouble on a journey from India to Canada and drifting for 227 days with only an adult Bengal tiger for company? Attempting to achieve the impossible is becoming a major theme in Hollywood lately with major adaptations of, to name but a few, On The Road, Midnight’s Children and Cloud Atlas. The road to Life of Pi hasn’t been easy with one big name after another stepping into the spotlight and back out again (namely M. Night Shyamalan, Alfonso Cuarón and Jean-Pierre Jeunet). Then in strolls Ang Lee to rise to the challenge aided by his dreamy visuals and incredibly life-like computer generated tiger. Lee is not new to the world of literary adaptations with critically acclaimed versions of Sense and Sensibility, The Ice Storm and Brokeback Mountain as evidence of his suitability. And whilst I can’t comment myself, I’m reliably informed that Lee didn’t move too far away from Martel’s novel, which ought to keep any Pi-hards out there pretty happy.